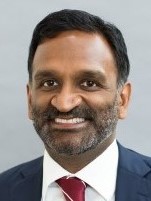 Kishore Jaybalan, until the end of 2019 director of Istituto Acton, the Rome office of the Acton Institute, Grand Rapids, Michigan (USA), formerly worked for the Vatican’s Pontifical Council for Justice and Peace as an analyst for environmental and disarmament issues and desk officer for English-speaking countries.  Kishore Jayabalan earned a B.A. in political science and economics from the University of Michigan, Ann Arbor.  In college, he was executive editor of The Michigan Review and an economic policy intern for the U.S. Chamber of Commerce.  He worked as an international economist for the Bureau of Labor Statistics in Washington, D.C. and then graduated with an M.A. in political science from the University of Toronto.

During his graduate studies, Kishore was baptized and received into the Roman Catholic Church by Pope John Paul II in Rome in 1996.  He later worked as a student campus minister at the university’s Newman Centre, which led to his appointment to the Permanent Observer Mission of the Holy See to the United Nations in New York in 1997.  Two years later, he returned to Rome to work for the Pontifical Council for Justice and Peace.  Kishore became director of Istituto Acton in 2005 and organized the institute’s educational and outreach efforts in Rome and throughout Europe.