For Eurozone Countries, the Problem Is Not So Much the Coronavirus, but Italy 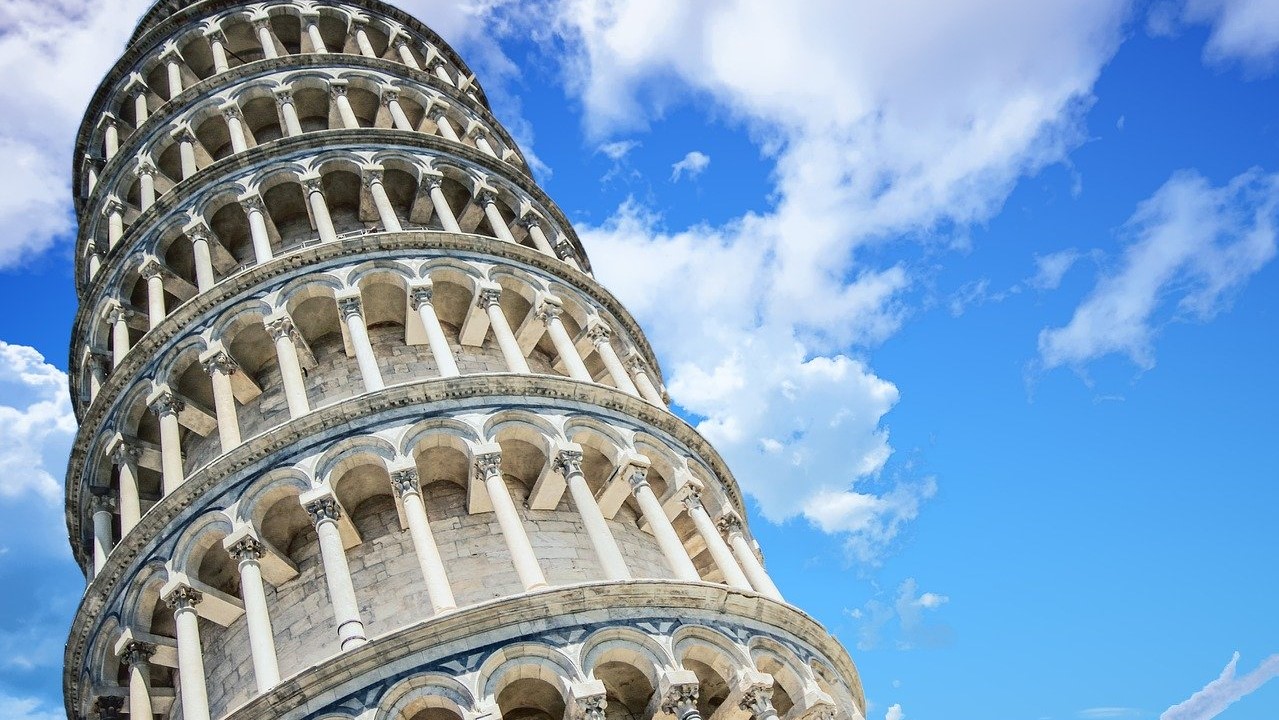 More things have gone wrong in Italy than just the Leaning Tower of Pisa. Is it possible to keep the whole country in this situation for centuries? (Picture: pixabay/ Pete Linforth)

Italy has a Coronavirus problem, it has had an economic problem for four decades, and now it is the hub of monetary problems that threaten to blow up the euro.

How did all this happen? Italy was the richest country on earth until 1650, as Angus Maddison shows in his timeline of wealth per capita. Genoa invented double-entry bookkeeping, floating national debt, and the issuing of banknotes as early as the 13th century. Venice’s domination of the seas—thanks in part to the assembly line production of ships in the “Arsenale”—the banking system in Florence, and the exchange fair in Piacenza were all important advancements. But around 1800, Italy was dramatically cut off from Holland, England, and Switzerland. It was not until after the Second World War that Italy’s economy grew again, caught up to, and 20 years ago briefly exceeded, the per capita income of England. This was celebrated as “il sorpasso.”

A third of the professors teaching at Italian universities are related to another professor, and the competition for posts does not seem to be based on academic performance.

That was it. Italy fell into what some economists call the middle income trap: when an economy creates all the cars, refrigerators, and three-room apartments of the industrial age; but then nothing follows—no information technology, biotechnology, internet companies, finance, or insurance on a larger scale and to a higher world standard.

Institutional Failure, Nepotism, and an Impenetrable Thicket of Laws

But the hard-working, clever, noble Italians were held back by their own poor institutions. According to the PISA assessments, the schools are not doing anything special: no major, regular breakthroughs have been reported from the universities. The brightest minds are emigrating and can be found at elite American universities. A third of the professors teaching at Italian universities are related to another professor, and the competition for the posts does not seem to be based on academic performance.

But above all, the legal system creates an obstacle course for anyone who wants to do anything. All the laws ever enacted, all the way back to the kingdom, they say, are still in force at the same time—a treasure trove for underemployed lawyers and fuel for conflicts of interest for powerful, or envious, groups. The Banca d’Italia writes that in Palermo, one in eighty inhabitants is a lawyer, albeit on a meagre income, but still keen on lawsuits of any kind.

As a first example—the gigantic steel complex Gioia Tauro, now called Ilva, originally founded by the government, is floundering in Taranto and has been insolvent since 2015. Moreover, there are currently dozens of different parties who are taking legal action against it. The trade unions (several of course), the government, EU funds, mayors, eco-groups, and the local parliament are all fighting it out, and the only person interested in taking over the company has just been scared away.

Arcelor-Mittal had to be told that the parliament would allow the future owner to be held responsible for the massive environmental damage of previous decades. Prime Minister Conte, for his part, prohibited any reduction in employees from the official 20,000 still employed to 5,000. The files “Norme per l’Ilva” can be viewed on the Internet for the “XVII legislature” of the Chamber of Deputies (Camera dei Deputati)—these norms are a web of highly complex, incoherent rules, and an incentive for appeals and lawsuits.

In Place of Structural Change: Labor Market Excesses and Corrections from the Treasury

Instead of legal pitfalls, a second example shines light on the economic incompetence of politicians. Indeed, the idea of a tax wedge is well-known—it is the markup on labor costs because of taxes. For a gross wage of 100 euros, the employer has to pay a 42% tax on it, while the worker has to pay 28% of the taxes and duties. The employer’s 142 euro of total costs are increased by a 22% Value Added Tax (VAT) on the product. Thus, out of 175 euros paid by customers, set aside by the employer to pay the worker, the worker takes home 72 euros—a tax wedge of over 100%!

Illegal employment thus becomes a dream for customers, companies, and workers, but international competition becomes a nightmare. The Renzi government therefore decided to pay 80 euros per month for each job—not to the employer’s costs, but into the pockets of the workers. This did nothing for competitiveness and the bankrupt state incurred huge costs because of it. The workers experienced the biggest real wage increase in years, but from the state treasury. What a lesson for everyone!

Italy does not have a feedback culture where suggestions and criticism are considered and responsibly resolved.

These representative examples add up to hard macro data. Italy has not been growing for years. On the other hand, government spending is growing, even before the Coronavirus spending wave of well over 100 billion euros. By the end of 2020, Italy will have national debt of around 160% of its domestic product—unattainable through taxes or growth. The labor market is completely regulated, and it is still almost impossible for entrepreneurs to lay anyone off. Consequently, if they hire at all it is only temporarily, or off the books, and at ragged wages. In southern Italy, 50% of adults under 34 years of age are unemployed. Once more, a bridge in Tuscany completely collapsed over five spans, even though individual motorists had been warning about it for months. Italy does not have a feedback culture where suggestions and criticism are considered and responsibly resolved.

Capital Flight and An Increasing Lack of Confidence Despite Strong Entrepreneurship

In the end, Italian entrepreneurs, who are competent on an individual basis, struggle to achieve an export surplus for the whole country, but the flight of capital turns all inflows in the opposite direction. Italy’s TARGET2 debt balance of around 500 billion euros with Germany, i.e., what the country has spent and theoretically owes, is the result of capital flight.

Because of the institutional distortions, no one, neither its inhabitants nor foreigners, trusts the country’s institutions. If direct investment comes at all, it only trickles in. International investors would keep pushing Italian bond interest rates up far above the German rates if the central bank did not constantly intervene and buy up these bonds.

Now, in the wake of the Coronavirus crisis, the European authorities want to intervene more strongly without formally communitizing the Eurozone’s debts, as Italy’s prime minister or Macron have been calling for. The ECB wants to buy up 750 billion bonds, hundreds of billions of which are to come from the European Investment Bank and from special funds, for example, through pure credit creation by the European Stability Mechanism (ESM), which has bank status.

Germany is wary about further communitization, and surprisingly, parts of the Five Star Movement (Movimento 5 Stelle) and Matteo Salvini of the Northern League (Lega Norde) are resisting European aid. This might have to do with the fact that Salvini and M5S have repeatedly spoken of  leaving the euro. In doing so, Italy’s previous, certainly huge, debt would simply be converted to new Lira in accordance with the underlying Italian law. But if enormous new loans in euros were to be added, in accordance with European jurisdiction, this would create a costly  barrier to a future independent monetary policy. The recent idea of Macron and Merkel to spend 500 billion € as a grant to southern Europe would circumvent this, but is highly contested by many member states. Perhaps it is an unusually Machiavellian instinct of Merkel – Germany would seem suddenly generous, while the Netherlands and Poland would appear cold-hearted.

The economist Alberto Mingardi of Milan’s Istituto Bruno Leoni, in an original and well-intentioned proposal, sees “Lombard Bonds,” i.e. borrowing from the rich and economically strong province of Lombardy, as a way out if such bonds were guaranteed by Europe. But servicing such loans would take tax revenue from this richest part of Italy away from the rest of the country. Thus, this too would run into the difficulties of the nation’s current financial pitfalls.

The Euro as an Unstable Currency: An Orderly Exit of Italy Would Be Preferable

All this is in the background, including the Northern European reluctance. That is why the Eurozone will continue to flounder, why the euro will be an unstable currency for the demands of international economic players, and why it will never be able to hold its own against the U.S. dollar. Soon, the Italian debt hole will be so large, the ECB’s money creation will be so controversial, and the demands on the North to pay will be so untenable, that any resolution will be imposed by force.

Above all, one need not only look at the possible intra-Italian coalitional disruptions or the political landscape in the North to be concerned about too much monetary aid. On the contrary, throwing money into Italy’s institutional, repressive, and rigid structures will destabilize the political landscape in northern countries. The Macron-Merkel gifts would bring about exactly this. Stop paying. It will get tangled up in Italy’s institutional mess, even without the help of right-wing populists.

An orderly exit by Italy, approached coolly, would make the euro more credible. That still leaves the other Latin countries (Spain, France, and Portugal) as doubtful cases.