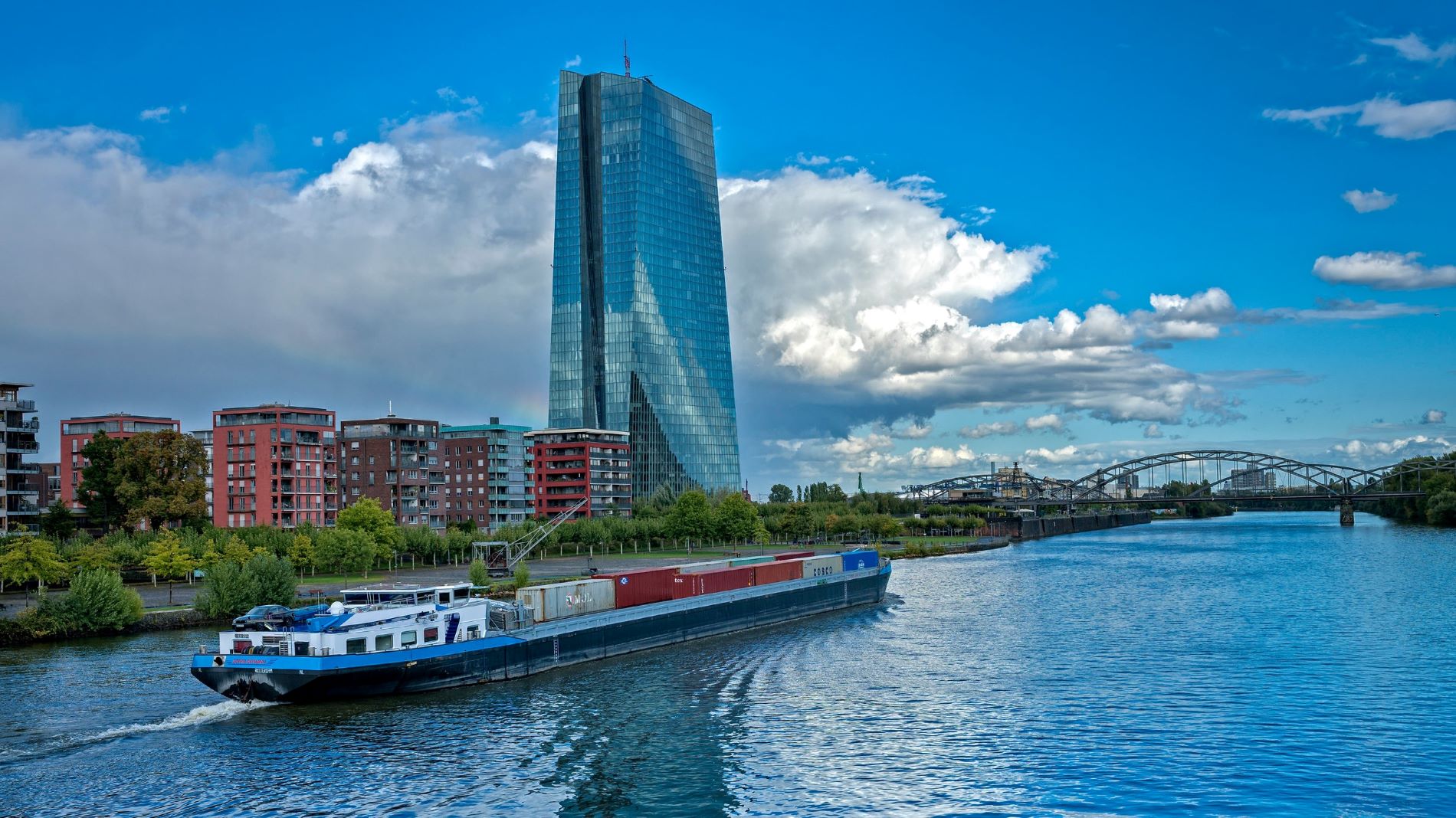 The European Central Bank (ECB) looms over the landscape like an all-dominant power. Real estate, trade, the economy as a whole and even the banks are increasingly coming under its political influence. But clouds are gathering: this image is deceptive. (Image: ©spn01/123RF.COM)

The following study by two economists from the Leipzig University shows that the ECB is weakening the profitability of banks while strengthening them in a way that allows it to implement policy goals with the help of commercial banks. Moreover, with the help of the negative interest rate policy, banks from the southern euro area, along with large banks that have struggled, tend to be propped up, but at the expense of banks in the northern euro area.

Click on the button below to download the text and figures in PDF format (Austrian Institute Paper No. 40-EN/2021).

While the U.S. central bank, the Fed, is in the process of cautiously scaling back its extensive bond purchases and may even raise interest rates in 2022, the European Central Bank (ECB) remains hesitant. Similarly, the Fed has used so-called reverse repurchase agreements to prevent money market rates from falling below zero, while the ECB has pursued a negative interest rate policy. It has pushed the money market interest rate (EONIA) into negative territory. Also, the interest rates on government bonds of some euro area countries, along with the interest rates on bank deposits of an increasing number of depositors have become negative (fig. 1, Schnabl and Sonnenberg 2021).

At the beginning of the ECB’s—or more precisely the Eurosystem’s[1]—negative interest rate policy there was a strong increase in commercial banks’ excess reserves at the ECB (fig. 2). In the wake of the European financial and debt crisis, since 2010 the ECB has been buying assets—especially government and corporate bonds—on a large scale. Since government bonds may not be purchased directly from sovereign states, the ECB has purchased them from banks and credited the equivalent value to the banks’ accounts at the ECB. The stock of government bonds on the ECB’s balance sheet has grown to approximately €3.7 trillion. In addition, the ECB’s longer-term refinancing operations, which can rise to as much as €3.3 trillion, have also increased banks’ balances with the ECB.

In June 2014, the ECB set the deposit facility interest rate, which is levied on excess reserves, into negative territory for the very first time at -0.1% and gradually lowered it to -0.5% (fig. 1). Annual interest payments by commercial banks to the ECB have increased from €3.3 billion in 2016 to €15 billion so far in 2021 (Jan-Sept), according to our estimates (fig. 3). In total, according to our estimates, €48 billion in “penalty interest” has been paid to the ECB by commercial banks in the euro area since 2016.

In addition, the so-called Targeted Longer-Term Refinancing Operations (TLTROs) were introduced in the wake of the European financial and debt crisis (Schnabl and Sonnenberg 2020). For the sake of economic stabilization, banks and companies were provided with additional favorable credit lines via this route. Until mid-2016, commercial banks still had to pay interest for refinancing with the ECB. Since then, a negative interest rate has been charged, which acts like a subsidy for the banks. The interest rate was most recently -0.5% to -1%.[2] According to our estimates, commercial banks’ income from TLTRO borrowing has risen from €1.8 billion in 2016 to around €20 billion so far in 2021 (Jan. – Sep.) (fig. 4).

Commercial banks’ deposits at the ECB are only partly voluntary, as the excess reserves are to a large extent the result of the ECB’s extensive bond purchases. Individual banks can hardly reduce the deposits on their accounts at the ECB. Additional lending does convert a small share of excess reserves into minimum reserves, but the credit demand is limited.[3] Although banks can exchange their claims for cash,[4] the ECB has significantly increased the cost of holding cash by ending the issuance of the 500-euro-note.

However, the ECB has reduced the burden of the negative interest rate on the deposit facility through two channels. First, so-called tiering was introduced in November 2019, which exempts excess reserves from negative interest rates in the amount of six times a bank’s minimum reserves (fig. 2).[5] In addition, the volume of TLTRO loans was expanded from €466 billion in January 2016 to a level of around €2.2 trillion in October 2021 (fig. 4), while at the same time the negative interest rate on TLTRO loans was lowered to a maximum of -1%. According to our estimates, banks in the euro area have thus received (at maximum) interest of €40 billion from the ECB so far since 2016. This has reduced the net negative interest burden on the deposit facility to around €8 billion for the period from January 2016 to September 2021.

Although the burdens for the banking sector in the euro area are thus increasingly moderate and the negative interest rate policy may even generate profits in the aggregate, there are distribution effects between the banks. The balances of the TARGET2 payment system indicate that private capital has flown from the southern part of the euro area to the north since the outbreak of the European financial and debt crisis (Sinn 2020). Moreover, the Eurosystem’s bond purchases have increased commercial banks’ deposits with the Deutsche Bundesbank more than with the central banks of the southern euro area. The corresponding interest burdens on excess reserves are therefore higher for commercial banks in the northern euro area than for those in the southern euro area.

On the other hand, there are indications of  distribution effects within the countries, which depend on the business model of the respective banks. This is apparent for instance with the German banks. Both large banks and regional banks (e.g., savings banks and credit unions) have seen a sharp rise in deposits with the ECB in the wake of the unconventional monetary policy, so that no clear differences can be identified in this area.

On the interest expenditure side, however, there are differences due to the financing structures. In the case of the savings banks and credit unions, the lending business is largely financed by deposits. Deposits are often higher than the volume of lending. In contrast, the large banks such as Deutsche Bank or Commerzbank have in the past also refinanced themselves by issuing bonds. The large banks were able to replace positive-interest refinancing on the capital market with negative-interest refinancing at the ECB (Barbiero et al. 2021). Since 2015 the ECB has also pushed the interest rate of covered bonds issued by banks on the capital market into negative territory (Fig. 1), albeit the rate is still less favorable as the one from the TLTROs.[7] In total this has brought significant interest savings for the respective banks.[8]

The ECB is thus acting with both a stick and a carrot vis-à-vis the commercial banks in the euro area. On the one hand, the extensive bond purchases drive up commercial banks’ deposits with the ECB and negative penalty interest rates are imposed on these deposits. This weakens the profitability of banks. At the same time, the ECB strengthens banks by enabling TLTRO lending. However, the most favorable TLTRO-rate (-1%) is dependent on the condition that the banks pass on the ECB’s loans to companies.

This allows the ECB to implement policy objectives with the help of commercial banks. Our analysis suggests that, with the help of the negative interest rate policy, banks from the southern euro area have tended to be supported, and banks in the northern euro area (including France until 2020) have been burdened. Moreover, in Germany, large banks, which have been severely affected by the global financial and debt crisis, appear to have been propped up.

The redirection of capital flows could be further expanded in the future. ECB President Christine Lagarde (2021) advocates a green monetary policy, which could herald preferential lending to “green companies.” What constitutes green investments could be determined by the taxonomy which the European Commission (2021a, 2021b) is currently developing. For some time now, the ECB’s influence has been growing as it undermines the private capital market with negative interest TLTRO loans. The ECB’s negative interest rate policy could thus herald that the allocation of loans in the common capital market will be even more controlled by the ECB in the future.

[1] This consists of the ECB and the 19 national central banks of the euro area, which implement the ECB’s monetary policy with regard to the commercial banks in the respective countries.

[2] Information on how the interest rate is determined can be found here and here. The calculation appears to be very complex. The tendency is to incentivize banks to maintain existing loans to enterprises and to make additional loans.

[3] Regulation related to capital and liquidity also works against a reduction in excess reserves through higher lending.

[5] The ECB followed a similar decision made by the Bank of Japan, which largely neutralized the burden on Japanese commercial banks by imposing a negative interest rate of -0.1% on their deposits with the Bank of Japan.

[7] In addition, covered bonds are also purchased under the Asset Purchase Program (APP).

[8] Bank customers usually do not accept negative interest rates for legal and economic reasons or evade them—e.g., by holding cash. Therefore, the interest rate on bank deposits is higher than the TLTRO interest rate.

European Commission, 2021a. “A European Green Deal. Striving to Be the First Climate-Neutral Continent.”

Sinn, Hans-Werner (2020). The Economics of Target Balances: From Lehmann to Corona. Palgrave-Macmillan, Basingstoke.