The Interest Rate Reversal Has Ended: What’s Next? 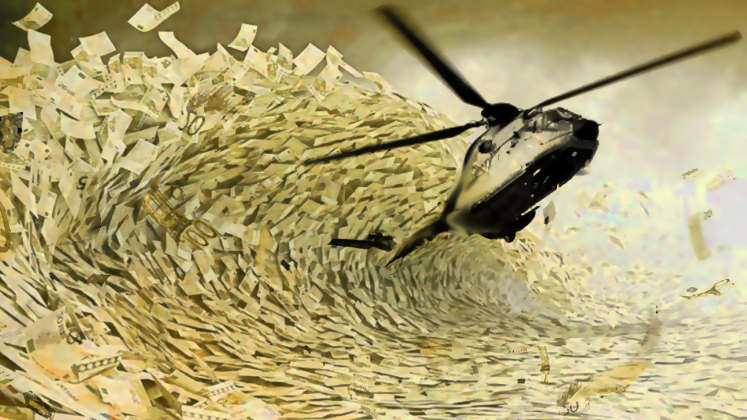 During the next recession, we could expect extreme measures by central banks, such as the use of what is called "helicopter money". In fact, this scenario is already taking place to some extent. (Picture: http://inflationsschutzbrief.de/)

For all those who are intensively involved with the financial markets or who deal with them professionally, December 2018 was a very interesting, almost dramatic month, not only because of what happened, but especially because of what could have happened.

The U.S. economy grew by almost 3% in the second and third quarters of 2018, unemployment was low, and consumer confidence was high. Such macroeconomic data were reason enough for Jerome Powell, President of the Federal Reserve, to continually raise interest rates. In October 2018 he said the Fed was “a long way from a neutral rate” and in December of that year he described the interest rate hikes “as being on autopilot.”

This was an interesting moment for many critics of the central bank’s policy. Was the criticism unjustified? Had it really been the right strategy, in retrospect, to cut interest rates to 0% and then cautiously raise them again when there was stronger growth?

But the cautious raising of rates did not work out. What happened afterwards in the second half of December could be made into a movie. The financial markets were tense anyway due to Powell’s risky policy of raising interest rates. On top of that was the escalating trade dispute between the U.S. and China. Daily news about the negotiations was posted on Twitter. The overall mood was predominantly negative. The U.S. and China both increased tariffs on each other and even resorted to other options to weaken the opponent. For example, China took advantage of its monopoly position in rare earth metals and curbed their exports.

The ‘mini-panic’ of 2018 marked the end of the interest rate hikes. From then on, there was a slow return to the safe haven of easy monetary policy.

This was not an easy situation for Powell. Rising interest rates and a trade dispute with China could be too much for the markets. On December 23, 2018, another bizarre event occurred: Finance Minister Mnukhin met with the CEOs of the major banks and then announced that the banks were very well capitalized. The problem with the statement was not the content, but rather the fact that he addressed capitalization in the first place. This scene is very reminiscent of 2007/08, when the then Treasury Secretary Hank Paulson also frequently had to meet with the bank CEOs.

On December 24, 2018 the Dow Jones fell again by just under 3%. The major international indices slid into a bear market (down 20% from their all-time high) and panic threatened to break out in the financial markets. This “mini-panic” of 2018 also marked the end of the interest rate hikes. From then on, there was a slow return to the safe haven of easy monetary policy.

Nobody knows what would have happened if Powell had raised interest rates on “autopilot.” However, it is reasonable to assume that it would have led to dramatic corrections on the stock markets, and the global economy would have slid into recession; instead, interest rates were cut again in 2019 and the central bank’s balance sheet was greatly expanded. Stock markets reached several all-time highs during 2019/20, and Trump cheered enthusiastically on Twitter.

No central bank in the world currently holds onto the prospect of resuming interest rate hikes. For many, 2018 has instead shown that it is impossible to bring interest rates back to normal levels without causing enormous panic in the financial markets. And whenever there is panic in the financial markets, it is only a matter of time before it spreads to the real economy. At present, no central bank seems to have the courage to accept this phase of panic for the price of a normalized interest rate level.

In addition, conditions are much worse than they were in 2018. Economic growth in the United States has cooled off, and the growing prospects of candidate Bernie Sanders and the novel coronavirus are additional straining factors.

We must therefore state the following as very likely: Interest rates will no longer be raised during the “upswing,” and therefore the next recession will not be able to be mitigated with interest rate cuts. Such a situation is unprecedented on this scale.

The scenarios that await us in the future are already being passionately discussed in expert circles. Many suspect the use of so-called helicopter money, i.e. an extreme measure by central banks to increase liquidity, which would inevitably lead to a sharp rise in inflation. A look at recent events in Hong Kong shows that such a scenario is already in its infancy.

Others anticipate conditions like those in Japan. There, a recession is already looming and interest rates are at zero. The extraordinary effects of this are anything but beneficial. Holger Zschäpitz describes them in Welt: “Many (Japanese) simply no longer enjoy the traditionally long working days and generally find partnership and sexual intercourse too complicated. The refusal to have sex is now followed by a refusal to consume. In the fourth quarter, Japanese people bought two percent less than in the previous three months, and on an annualized basis consumption slumped by no less than eight percent.”

Interest rate hikes, and thus a return to the ‘normal interest rate cycle’, are unrealistic.

For many, Japan is a negative example that shows the consequences of a long-term zero interest rate policy. The “Japanese economic sclerosis” has long been a term among analysts. It is usually used to summarize various factors: Stagnating real wages, growing debt, lack of economic growth and even more far-reaching cultural consequences, such as those mentioned by Zschäpitz.

We can at least say this: Interest rate hikes, and thus a return to the “normal interest rate cycle,” are unrealistic. Moreover, a recession is highly probable in the coming years. The United States is now in the 129th month of an economic upswing, the longest since 1854, the beginning of U.S. economic recordkeeping. (The figures are publicly available from the National Bureau of Economic Research). There will certainly be a reaction to a recession on the part of politicians or the central bank. It remains to be seen what exactly this reaction will be and which of the scenarios will materialize.

More Personal Responsibility from Savers Will Be Necessary

What we can do is make clear the immediate consequences of a definitive continuation of zero-interest rate policy. The most important consequence for savers is probably negative interest rates and the question this raises about what should be done with one’s savings. It is obvious that negative interest rates are being introduced by more and more financial institutions. Here, savers must use comparison sites to avoid the negative interest rates if necessary. But banks will also look for other ways to earn money. Whether this comes in the form of checking account fees, unrequested charged bank statements, rising transaction costs for the purchase of securities, etc., the banks will look for other ways to earn money.

Due to the negative interest rates, it is simply becoming increasingly difficult for the private customer divisions of the major banks to operate profitably. An article in Welt with the pointed title “Wenn der Kunde der Bank nur noch lästig ist” (“When the Bank’s Customer Is Only a Nuisance”) sheds light on the situation. It is the case with many customers that too little money is earned to exceed the costs, although such customers would usually, in normal times, bring a company profit. One popular way to respond to this pressure on earnings is job cuts. Landesbank Hessen-Thüringen (Helaba) announced only a few days ago that it would cut 400 jobs. The head of the bank, Herbert Hans Grüntker, even describes the cutbacks as being “without alternative.”

One thing is certain: the coming years will be no different, and the banks will thus not have an easy time making money from the business of serving private customers. Therefore, customers will have to prepare for additional costs, including possible negative interest rates on private deposits. Fortunately, there are—at least at present—still many institutions that offer very attractive conditions for private customers. Finding these requires some due diligence on the part of savers.

Savers nowadays need to take on much more personal responsibility. There are no longer any “safe” interest rates to compensate for inflation. And this should remain the case for the near future. Unfortunately, investing money in other assets is not child’s play either. Solutions to these questions cannot be addressed by an article of this size. As I said: There is no way around personal responsibility and initiative.

At the macroeconomic level, the near future should also be very interesting. The novel coronavirus provides an additional stress test for the economy. The possible election of Bernie Sanders as U.S. president would also present a challenge. So perhaps we will see much sooner than expected how central bankers will react to a downturn or panic in the financial markets despite interest rates already being zero.

As part of its educational initiative and as an investment in the future, the Austrian Institute supports and promotes particularly talented young authors, such as the author of this article, by giving them the opportunity to publish. As with all other contributions, we always pay attention to the quality of style and content.