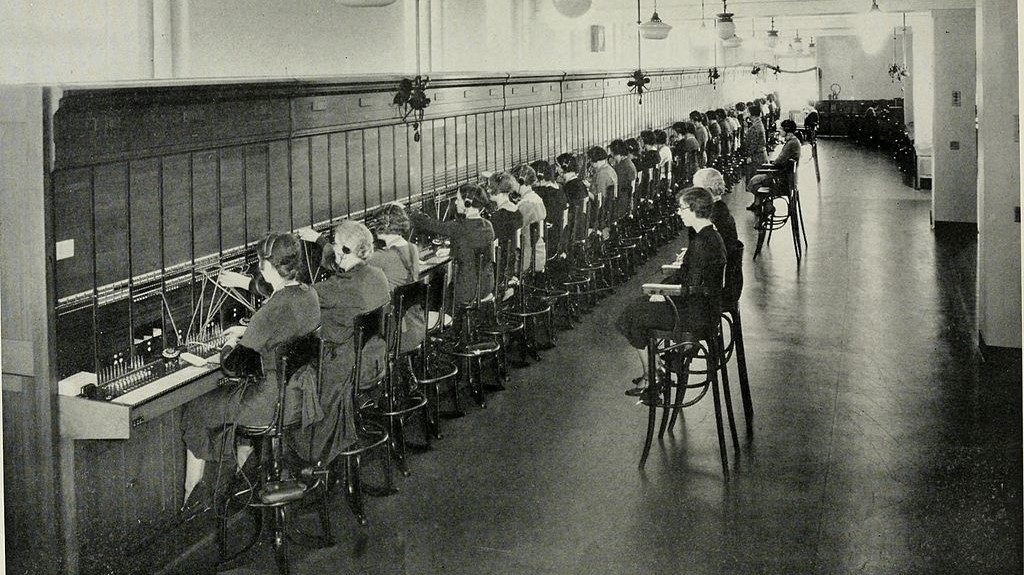 Operators in an AT&T telephone exchange: Illustration from the “Bell Telephone Magazine” from 1922. Communication technology has come a long way since then, and the USA has always been one step ahead of Europe. (Image: flickr/Internet Archive Book Images)

At this moment in which politicians in Europe and North America are already planning again what technology and infrastructure should be provided in the future, this time in packages of trillions, this reexamination is sobering—and alarming.

Information and communications technology has undeniably dominated the economy and society for 40 years, and this is the exact area in which Europe’s governments deliberately put Europe 16 years behind schedule, a backlog that can no longer be made up.

In 1982, President Reagan’s conservative administration broke up the privately-owned giant AT&T, the monopoly of the telephone and cable networks in the USA. Whether the intervention was justified in terms of competition policy is disputed among economic liberals. However, the fact is that the “network architecture” was subsequently invented, which from then on has also determined rail, electricity, and gas. The physical, regional telephone networks were awarded to seven successor companies (the “baby bells”). AT&T itself became a provider on the networks, in competition with others. It, like others, also entered mobile telephone service. A wave of offshoots and spin-offs in all communications services followed, the sector showing enormous vitality and creativity, then generating profits and modern jobs.

Europe’s coddled economies have produced nothing comparable. But politicians now want to regulate, control, and tax these American companies.

In Europe, however, the postal monopolies, which also operated telephone services, hunkered down behind their protective walls and collected enormous profits. In part, the tariffs were pure taxes for the state coffers, something politicians always appreciate: no accountability to the public. Inexplicably—the individual nations, coordinated and slowed down by the EC (today, the EU) held back the reform. It was not until January 1, 1998 that the telecom markets opened up in Europe. Only then did mobile telephone services become available to the general public.

The U.S. Lead That Is Now Too Great to Close

In the U.S., however, liberalization after 1982 unleashed a wave of private innovation that created the large network and telecommunications companies that today frighten Europe’s politicians and cause trouble. The resourceful Americans had a 16-year head start. Verizon, the new AT&T, and Sprint were created in 1983, then Qualcomm in 1985 as a supplier of chips for the telecoms, Voice Stream, and Netscape in 1994, followed by Google in 1998 and all the others—all by private initiative.

In addition, outside the narrower telecom sector, there were the technological wonders from the garages of young people, who were often university dropouts, such as those who founded Microsoft, Apple, Hewlett-Packard, and Facebook. Europe’s coddled economies have produced nothing comparable. But politicians now want to regulate, control, and tax these American companies. The EU itself responded to Google rather late with the project “Quaero” (Latin for “I ask”), a politically desired search engine that fell silent after 400 million euros had gone down the drain. The name had to be classical Latin, of course, because we have culture. At the moment, the EU is promoting a “cloud” after this has already become a billion-dollar business with Amazon, Microsoft, and many other U.S. giants. Perhaps they will come up with the name “Nephele,” the classical Greek word for “cloud.”

Basically, the Anglophones (the USA as well as the UK), had practiced network architecture for a long time—with the physical networks, i.e., rail, wires, and pipes belonging to society (and it does not have to be the state), and competition of services and products takes place on these networks.

This presupposes analytical thinking, a recognition of the material foundations and how these things function. The “positive externality” of the networks was also known in the U.S. for a long time: those who operate them and those who connect as users always gain more than they contribute. The network company, Google, has made efforts for its programs and employees, but every new user costs them nothing—the business is scalable without costs. And every user who joins has two billion previous users and contributors at his or her disposal, free of charge.

It’s hard to believe that as recently as 2001, communications professor Manfred Fassler published his book for students Netzwerke. Einführung in die Netzstrukturen, Netzkulturen (UTB) without wasting the slightest thought on externalities, i.e., the driving force of networks. In return, he pointed many cautionary fingers in the scholarly babble of German academics. And Fassler was a member of the “Sprecherrat für Medien- und Kommunikationssoziologie” of the German Sociological Association, i.e., the country’s top brain trust on the subject.

The European trade unions were no better. They have been warning against the new technologies since the early 1980s. Workers should sit in front of a screen for no more than two hours. Millions would be laid off. In this climate of “thinking,” it was impossible to catch up with the Americans’ information and communications revolution. Sixteen lost years that cannot be recovered.

Europe: Billions in Taxes for Technologies of the Past

In contrast, European politicians made their own uninformed technology choices at the same time that the U.S. liberalized private telecom markets: France nationalized the steel industry, auto industry, and pushed nuclear energy, Germany favored hard coal, Italy filled the billion-dollar holes of its steel, armaments, and aviation industries with subsidies, and Belgium also found steel and mines worth promoting and subsidizing, to the tune of billions. Austria sank its industrial billions into the steel-based technology and capital goods company, Voestalpine, while Switzerland wasted it on small-scale agriculture, to protect jobs. Everywhere billions of the present are spent on technologies of the past.

For decades, European politicians have all missed the main trend of the post-1980 economy and cemented the status quo.

In retrospect, one almost has to laugh: For decades, European politicians have all missed the main trend of the post-1980 economy and cemented the status quo. This is all the more serious because the model of change was right before everyone’s eyes in the U.S., flourishing and innovating. But European politicians see the state, or more precisely their spending packages, as a guarantee for existing jobs. The fact that new jobs are always needed, and that only private companies technically create them, escapes their world view.

Every once in a while, the billion-euro programs literally come to nothing. The EU’s fabulous “Juncker Plan” in 2015 promised around 500 billion euros for gigantic infrastructures. The EU Court of Auditors has now concluded that much was not even called up and spent, that many projects would have been paid for anyway (“windfall gains”). If we count correctly, around 125 billion has been spent. Italy has spent just 6.7% of the first COVID package of 80 billion, which is all the bureaucracy has managed, as Prime Minister Draghi recently stated. Empty promises, empty grandstanding by politicians.

Today, energy policy is being served up with a big ladle. The EU wants to spend hundreds of billions, and Biden similar sums. The politicians know exactly what they want, as they did with nuclear power, (e.g., hydrogen). At the same time, they are making energy policy with climate certificates against fossil fuels.

But the certificates are too cheap; if they were priced correctly, and the proceeds were reimbursed to the citizens per capita, the incentive to save oil would be there, without spending billions, and without a growing state share in the national product. One homeowner would burn wood chips, others would use diesel very sparingly, others would dig for geothermal, others still would choose hydrogen, and all would insulate. But the fevered fingers of politicians pull the strings everywhere, piling up costs and preventing private technological choice.

One last thing: What you are reading is neither a neoliberal nor a conservative pamphlet, only hard facts.