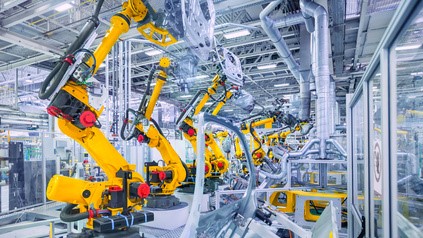 Robots in an automotive factory: innovation that produces marketable products comes from the creativity of companies, the ideas of individuals, and the teamwork and willingness of investors to take risks with their own money. (Image: Fotolia)]

Is it possible to divide the world into “good” and “bad” in a strictly scientific way? Of course not. Nevertheless, the EU Commission has taken on this responsibility. As part of its “Green Deal,” it has an army of experts comb through the “universe of economic activities” and divide them into sustainable and non-sustainable activities. In so doing, it aims to educate investors who would not take sufficient account of ‘environmental and social considerations.’” This has resulted in an initial report that is hundreds of pages thick.

The EU Commission is ultimately concerned with steering investments in a certain direction, but the meaning of “sustainability” should not be determined in Brussels.

Economist Clemens Fuest, president of the Munich-based Ifo Institute, is not known for blowing things out of proportion, but he does not mince words on this one. As he said in a recent lecture, this list reminds him of a centrally planned economy in which all areas are neatly catalogued by the planning authority.

The EU Commission is ultimately concerned with steering investments in a certain direction, but the meaning of “sustainability” should not be determined in Brussels. How does one classify nuclear energy, for example? It hardly produces any carbon dioxide, but countries like Germany and Switzerland do not want to discuss it anymore.

The head of the Siemens industrial group, Joe Kaeser, also sharply criticizes the Commission in the “NZZ am Sonntag”: Even the most modern gas turbines are not considered environmentally friendly in the EU, despite the fact that they produce 60 percent less emissions than modern coal-fired power plants. With its classification mania, the EU Commission ultimately determines the fortunes of companies.

The State Lacks a Compass

There is even talk of banks being allowed to back loans with less equity if the money goes into “green” investments. Politicians should have learned more from the experience of the financial crisis: Back then, American banks had been encouraged by the U.S. government to lend to poor households, which was one of the causes of the subprime crisis.

The idea of government steering is not only en vogue in the EU Commission. One representative of this movement is economist Mariana Mazzucato, with her book “The entrepreneurial state.” In it, she claims that the iPhone, the Internet, and many other inventions are based on state research and financing. For this reason, the state should take a much more active role and initiate “trend-setting investments.” But here, developments are retroactively interpreted as inevitable in a way that they never were.

Fifty years ago, for example, physicists from different universities shared their research papers on behalf of the U.S. Department of Defense via the so-called ARPANET. Today, this network is regarded as the nucleus of the Internet. But who would have even remotely imagined its triumphant progress back then? Government research, often military research, creates spillovers, but it has little to do with “mission-oriented innovation” (Mazzucato). Whether something is trendsetting is always known only after the fact.

A look at history also shows that the influence of the state is often overestimated. In the 19th century, the railroad provided a productivity boost. However, it was not the public sector that was behind it, but private capital. In contrast, proponents of government innovation policy claim that private owners are far too short-sighted and shy away from major risks. But this accusation is exaggerated, as the successes in the development of a Coronavirus vaccine suggest.

Pfizer Does Not Want Government Money

The Sprüngmann brothers got rich by selling their generic drug company Hexal to Novartis. In 2005, they spent a full 150 million euros to finance the work of the research couple Özlem Türeci and Ugur Sahin, who are now making a splash with their company Biontech. Their Coronavirus vaccine has meanwhile been approved in several countries.  In a stroke of good fortune, the same method the pair had researched for cancer therapy also works to combat COVID-19. Incidentally, the vaccine project at Biontech went by the name “Lightspeed” – it is hard to imagine such a name for a government endeavor.

It always takes people to turn research results into products that appeal to consumers.

Biontech did receive money from the German government, but by then the company had long since taken a risk with its research. Its research partner, the U.S. pharmaceutical giant Pfizer, even deliberately did so without government support. The reason given by Pfizer CEO Albert Bourla was that he wanted to free his researchers from bureaucracy and prevent his company from being instrumentalized (by Trump) in the American election campaign.

It thus took the daring of a pair of wealthy brothers to give a talented and proactive pair of researchers the time they needed. Their entrepreneurial spirit, in turn, paid off because top university research alone is not enough. It always takes people to turn research results into products that appeal to consumers. The MP3 player, for example, was also developed in Germany, but it was Apple that incorporated the technology as standard in its iPods, making it a global success.

It is considered common knowledge among economists that more money spent on research is money well spent. But that is too simplistic. According to a survey by the U.S. Department of Labor, the return on spending on research and development is indeed in the double digits—but this only applies to the part that is borne by companies. In contrast, no effect could be found for publicly financed research—this had also been previously reported by the OECD. Countries such as Switzerland, South Korea, Japan and, increasingly, Germany, which not only conduct a great deal of research but also do so primarily in the private sector, are in a good position.

Sooner or later, discussions about the role of the state always refer to the “Sputnik moment,” that is, the shock in the West when the Soviet Union became the first country to send satellites into space. EU Commission President Ursula von der Leyen alluded to the Green Deal as Europe’s man-on-the-moon moment. At the time, the Soviets had invested vast sums in the Sputnik project, for which the people had to make an enormous sacrifice in consumption—they were never consulted. In any case, anyone who talks about an “innovative state” should be careful with comparisons.

It is not routine, but precisely a spirit of discovery that is needed; it is not a commission of experts, but inventors and entrepreneurs acting at their own risk that shape progress.

Even in space travel, what is familiar does not last forever. In any case, it is not without irony that the private company SpaceX, owned by Tesla founder Elon Musk, is now flying both American and Russian astronauts into space. SpaceX, with its reusable rockets, is simply cheaper and more reliable than its government counterparts.

It is not routine, but precisely a spirit of discovery that is needed; it is not a commission of experts, but inventors and entrepreneurs acting at their own risk that shape progress. As Deirdre McCloskey and Alberto Mingardi write in The Myth of the Entrepreneurial State, innovation only succeeds from below, with the knowledge that is available in a decentralized way among millions of people. This diversity is seen, for example, in the fact that 57 vaccines against COVID-19 are already in the clinical phase and another 87 are in the preclinical phase.

Instead of talking the talk of an innovative state, much would be gained if politicians opposed the widespread hostility to progress. The EU, and Switzerland in its wake, abandoned green genetic engineering twenty years ago against their better judgment.

In Switzerland, “the moratorium” on the cultivation of genetically modified plants is therefore likely to be extended soon until 2025. And the promising “gene scissors” are to be strictly regulated, although the Federal Council had initially envisaged a relaxation. It falls into the same narrative as nuclear energy and its research, which are rejected per se, although it is becoming increasingly clear that a secure energy supply cannot be achieved with sun and wind alone.

Those who insist above all on good framework conditions are now regarded as old-fashioned. Yet this would go a long way: A price for CO2 would trigger investment in climate-friendly projects—without a massive report dividing the economy into “good” and “bad.” It is enough for the state to set the rules of the game; it does not have to be both referee and player. A broadly understood responsibility for the “innovative state” does not create a climate in which people can develop. Rather, state control and creativity are mutually opposed.

This article was originally published in the Neue Zürcher Zeitung 12. August 2020. Translation from German by Thomas and Kira Howes