After Brexit: The EU Fears Regulatory Competition and Behaves Like an Empire 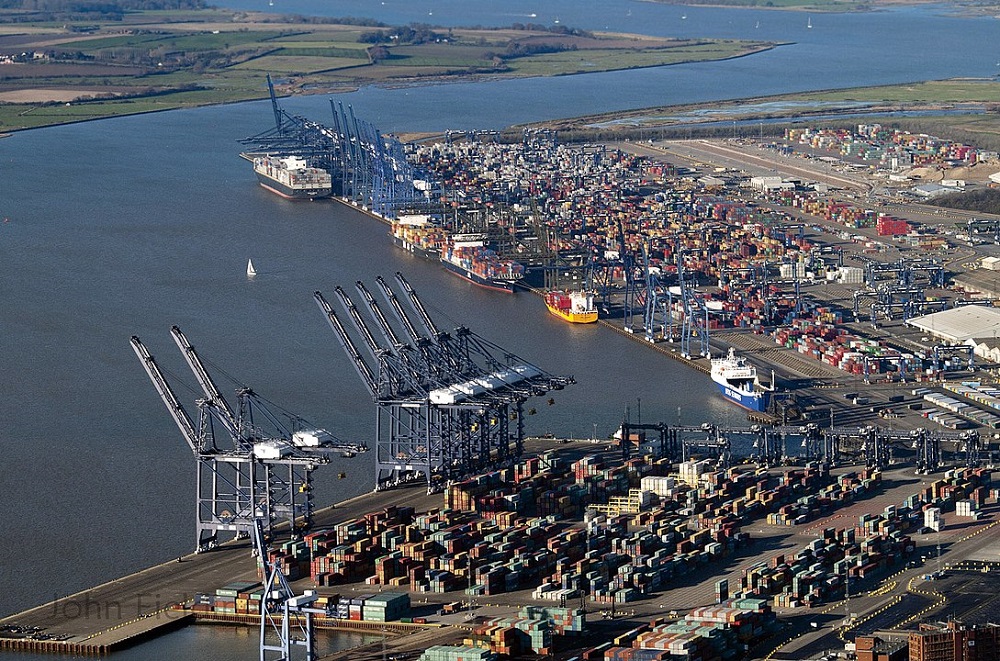 The container port of Felixstowe (Suffolk, England) in the North Sea is the largest in Great Britain. Will it become more important after Brexit, or less? (Picture: John Fielding / Wikimedia Commons)

The Brexit negotiations begin like a boxing match: the image here is really striking. The two fighters are bare (transparent) except for their shorts; they punch around wildly with their fists for practice, and they are made fierce by their trainers. But the biggest difference compared to boxing—there is no agreement about the rules.

This applies primarily to the EU side. The negotiation document clearly states as its highest principle that Great Britain should under no circumstances compete with more favorable regulations of any kind than those of the EU. It also makes it clear that future, as yet unknown rules must be accepted and observed by the British in advance.

Boris Johnson and the negotiator David Frost state just as clearly that England seeks its sovereignty and will exercise this sovereignty with its own laws.

Brexit Must Not Succeed—Says the European Union

The English are throwing their fists around to make it clear that if necessary, they will turn their backs on the EU-constituted Europe with gusto and remain without an agreement at the end of the year. The EU Commission, however, threatens them with all kinds of bullying to have them excluded from the world’s largest single market.

And then the trainers: A number of French ministers act as agitators, demanding that the English, if they were to leave, would have to do worse than EU members. For his part, Manfred Weber, President of the People’s Party Group in the Brussels Parliament, sees the beginning of the end of the EU “when Brexit is perceived as a success.” Over in England, of course, the tough people who want to withdraw are breathing down the Prime Minister’s neck, most notably his influential adviser Dominic Cummings.

Customs duties and imports of cars, eggs, steel, and fishing in the North Sea and the role of London as a financial center, seem to be only secondary.

When it becomes clear that you can do good business outside the EU in Europe, and even better business thanks to softer regulations, it strikes at the very heart of the Brussels standardization campaign.

And so it is. Because the first departure of a—large—member state has struck a blow to the EU mantra of “enlarge and deepen.” When it becomes clear that you can do good business outside the EU in Europe, and even better business thanks to softer regulations, it strikes at the very heart of the Brussels standardization campaign. The EU had almost completely excluded this regulatory competition, but now it is coming back to life. The EU Commission is also trying to impose a framework treaty on Switzerland, a non-member, wishing to impose its sovereignty under future, currently unknown Brussels regulations (“dynamic alignment”).

As Carl Schmitt, a lawyer who—despite his earlier legal support for the Nazi regime—was later recognized in liberal circles, said, “It is part of the nature of [democracy] that all decisions made should apply only to those who make them.” The EU, however, behaves in an imperial manner, with rules on third parties, despite having often simply reinterpreted its own rules on a case by case basis, unpredictably. Examples of this include: the Maastricht criteria, the European Central Bank with the euro, the primacy of treaties over the constitutions of the members by a simple European Court of Justice decision in 1963. Similarly, the EU Commission interprets subject areas, which can only be regulated unanimously, as “necessary for the internal market” and thus controllable by simple majorities—the labor market, social regulations, and recently, taxes.

It is a typical case of claiming higher or better knowledge over the existing rules.

The Resurrection of the British Empire?

In view of such fundamental opposition between the two camps, the boxing match could end in a draw rather than a knockout by one side: England leaving without a treaty.

Preparatory work has been started for this, which in any event continues—free trade plans with the USA and Canada, Australia, and India. The British Empire could thus be resurrected: in terms of trade. One of these plans has already been negotiated with Switzerland. Enterprise zones are then to be established in several places, including in rebellious Scotland, where extremely soft rules of all kinds will apply. Finally, Boris Johnson is consolidating his power as a “labour leader,” so to speak, because he is raising the minimum wage as early as March, and he guarantees that there will be no more low-wage immigrants. A qualitative kind of points system, like the one in Canada, is supposed to ensure this.

As for customs duties, imports, and exports, a non-contractual situation would put the two partners under the rules of the World Trade Organization (WTO).

The British Department of Trade keeps a list of 533 items that would be affected by tariffs or quotas—including cars from the EU with 10-16% duty. The EU’s external tariffs are on average 3%, so they would not create a chasm. The EU could not increase them without fearing WTO compensation. Problems would create border controls with up to two day waiting periods and hindered supply chains. However, this applies on both sides, and car and agricultural producers in the EU have stated several times that they want to push back against Brussels’ stubborn attitude.

The EU’s existing free trade agreements would have to be adapted by England, which is conceivable, because that depends on its partners, not on the EU.

“Singapore on the Thames”— A Not Entirely Unrealistic Perspective

Some significant material issues are the fishing rights in the North Sea, where the EU now fishes along with England, which has a negotiating chip. Then there is the financial center of London—with less stubborn and harassing regulations in the future than what the EU has or is currently developing. But for some transactions, London companies have already secured themselves a second seat in the EU. The real big transactions are not being taken away by the EU Commission but remain in London because customers from all over the world want them there. 90% of the world’s interest rate swaps go through London, and huge commodity transactions, most of the clearing (i.e. the netting of transactions in euros) go through London. Paris wants to poach these but has done little so far and would have to, for example, accumulate huge guarantee funds, which London has already accumulated.

Moreover, in the event of major bankruptcies, England could print and inject money at any time, whereas France has no currency of its own. Moreover, Britain is a global economy, unlike closed, regulated France. London’s goal of being a “Singapore on the Thames” is not unrealistic. What remains to be negotiated with the EU is the change from “passporting rights,” i.e. automatic access for London houses on the continent, to an “equivalence,” i.e. recognition of the equivalence of rules. On that matter, the EU Commission could backtrack at any later date. But London’s customers from all over the world want this location; they are not like the Brussels officials, without any business to offer.

Finally, Brussels’ demand that England remain in the Strasbourg Convention on Human Rights appears to be a grotesque inconsistency. For the EU members unanimously wanted the EU to join it, but the European Court of Justice blocked it. It does not want other judges. The now sovereign England should learn a lesson.

A New “Competition for Solutions”

Everything could indeed boil down to the fact that with the huge new free trade areas,  enterprise zones, a workforce that will in the future be more qualified than Germany’s mass immigrants, and possessing the innovative financial center, the Boxing Rounds of the coming decades will favor London. Brexit might not only be “perceived as a success” but might truly be one. At first, most of the media, especially on the continent, howled that Brexit would never happen, and now they are certain that it will plunge England into poverty. But the paralyzed France, the politically torn Italy, Germany and its dependence on the ailing diesel car, and the unmanageable East are placing a greater burden on the rest of the EU. Brexit has revived the centuries-old “competition for solutions” that has made Europe innovative.