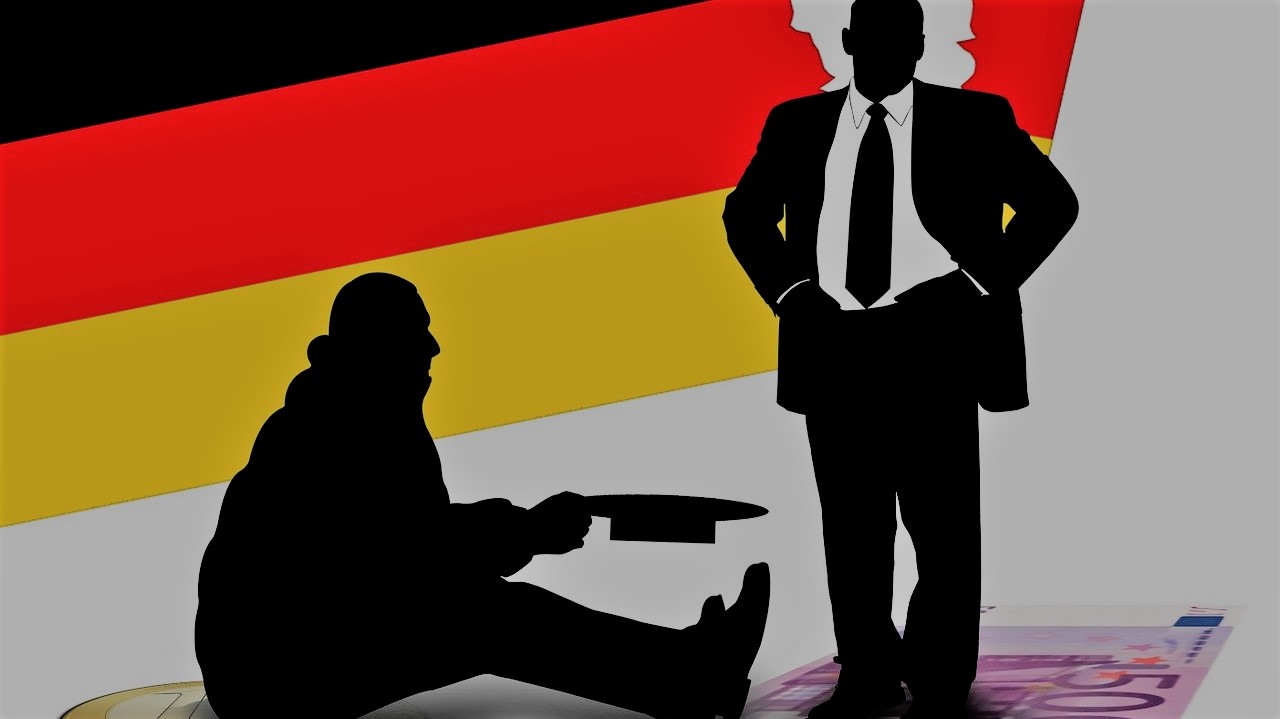 Germany is a socially unjust nation, the rich should be asked to pay more—or so many believe. But this accusation is hypocritical, because most of the problems are caused by the very policies that the accusers themselves advocate. (Image: Gerd Altmann on Pixabay)

The book Working Class—Warum wir Arbeit brauchen, von der wir leben können [Working Class – Why we need work we can live on] by journalist Julia Friedrichs is just what you would expect. Just in time for the super election year, the young author complains that social advancement through gainful employment is almost impossible in Germany nowadays. Throughout some 323 pages, all kinds of data and consternation are cited as evidence of why the middle class no longer has enough to prosper. Globalization, deregulation, financial capitalism and—of course—’antisocial’ policies are to blame. Thus far, all so familiar—and not entirely wrong.

Social justice is a perennial issue in Germany. While Ludwig Erhard wanted to create “prosperity for all,” today the focus is on leveling the differences between rich and poor.

This journalist’s work is receiving a lot of (media) attention. It is consonant with the sentiment, constantly reiterated: “Rich Germany” has a lot of poverty. To accentuate this drama, a statistical trick has recently been used: Actual material hardship is not the criterion, because according to the German Federal Statistical Office, it fell from 5.3 percent to a low of 3.1 percent from 2008 to 2018. Also, the number of benefitting from the unemployment and social assistance program ‘Hartz IV,’ from basic security or the asylum seeker assistance, has fallen from ten (2006) to eight percent (2019). Therefore, they construct an idea of a potential “risk of poverty.” Anyone who has to live on less than 60 percent of the median income is already affected. Thus, if a shower of money were to rain down on Germany overnight and everyone’s wealth were to increase tenfold, the statistical at-risk-of-poverty rate would not change.

Left-Wing and Green Policies of Redistribution from the Bottom Up

Social justice is a perennial issue in Germany. While Ludwig Erhard wanted to create “prosperity for all,” today the focus is on leveling the differences between rich and poor. The Greens, Social Democratic Party (SPD), and Left Party, which are heading for a change of power in Berlin this fall, need as much inequality as possible to justify their demands for “taxes on the rich” and additional wealth levies. They would be happy to top this off with a guaranteed income to which even those who do not want to work should be entitled.

The real reasons why the lower half of the population remains relatively unprosperous are rarely addressed.

The German debate about justice rarely goes beyond the banal demand for redistribution from the top down. There is a system to this: the real reasons why the lower half of the population remains relatively unprosperous are rarely addressed. If we thought this through to the end, we would end up blaming those who complain the loudest about “unjust conditions.” The truth is that they are redistributing wealth from the bottom up.

An Example of Rising Rents and Real Estate Prices…

The example of rising rents and skyrocketing real estate prices makes this particularly clear: Although only 14.4 percent of Germany’s 357,000 square kilometers are designated as residential and commercial areas, the Greens have declared war on “land gluttony.” Wherever they have their say, new construction areas are prevented. If possible, single-family homes will no longer be allowed at all. This politically intended shortage is driving up prices dramatically. Expansive zoning laws and ever stricter energy-saving requirements are also ensuring that even middle-class families with good incomes can give up on the dream of owning their own four walls. The beneficiaries are the owners of land and real estate. A dynamic of less supply and more demand (also due to immigration) allows their assets to grow. This in turn deepens the lamented gap between rich and poor.

That is because without ownership, you will be a tenant forever—and thus cut off from accumulating assets for old age. With an ownership rate of less than 50 percent, Germany is already at the bottom of the rankings. Moritz Schularick, an economic historian from Bonn, has calculated that the poorest 20 percent of German households now spend almost 40 percent of their income on housing. In 1993, the figure was 23 percent.

…And Excessive Energy Prices: The Beneficiaries Here Are Also the Wealthy

This group of people is also suffering from high energy prices: At 30.43 cents per kilowatt hour (kWh), the highest electricity price, some 350,000 households can no longer afford to pay each year, and their electricity supply is cut off. According to the Federal Statistical Office, two million people in Germany lack the money to adequately heat their own homes. Even the Federal Court of Auditors criticizes this one-sided burden in its latest report. Nevertheless, the Greens and the SPD want to drive up the prices of electricity, natural gas, gasoline, and heating oil even further. This is supposed to slow climate change, even though Germany contributes barely two percent to global CO2 emissions.

The beneficiaries of this energy turnaround are, in turn, those wealthy people who own roofs and land for solar farms and wind turbines, or who put a lot of money into highly profitable “green funds.” They can also afford the expensive electric cars, while the working commuter is deprived of his old diesel, which he urgently needs to earn a living. This is another way of taking from the poor and giving to the rich.

While there is no money at home to give dependent employees more net income, the government is acting as a major benefactor in Europe.

Thus, the leftist-green redistribution continues. While there is no money at home to give more net income to dependent employees, the government is acting as a major benefactor in Europe. Contrary to the clear legal situation, Finance Minister Olaf Scholz has declared as a political goal a debt union. The Social Democratic Party candidate for chancellor, who has taken an oath of office for the good of the German people, is thus taking his own taxpayers to task in order to save the much wealthier citizens in Italy, Spain, or France from unpleasant reforms. After all, with a median net wealth of just 61,000 euros, the Germans are even poorer than the Greeks, whom they had to help with many billions of euros. The EU average net wealth is 100,000 euros.

At the same time, the country under Merkel’s government has not only climbed to the top of the tax and contribution burden among OECD countries, but the working middle class here also contributes the most to tax revenue at 27.17 percent. All promises to provide noticeable relief for the lower income groups in particular are empty. It is also this group of people that suffers most from the zero or even negative interest rate policy of the European Central Bank (ECB). After all, small savers cannot afford risky equity investments. So here too: Redistribution from the bottom up.

The topic of migration is completely ignored in the German debate about justice. Even in official studies such as the “Sozialreport 2021,” only a marginal distinction is made between domestic and imported poverty. As one of the few notable politicians, only Friedrich Merz has called for the following fact to be included in the debate on wealth inequality: “If we hadn’t added immigrants into the welfare systems in 2015/16, we would have one million fewer Hartz IV recipients.” But the call for more transparency was immediately discredited as racism. Yet the conservative adversary of Merkel, who almost became CDU chairman in December, has the facts on his side: of the 5.52 million “standard benefit recipients under Social Code II” at the time, colloquially known as Hartz IV recipients, around two million do not have a German passport. 980,000 are assigned to the group of people known as “asylum seekers.”

The report now presented by the Federal Institute for Population Research also speaks a clear language: Above all, the immigration of educationally deprived classes from Africa and the Arab world, as well as their significantly higher birth rate, led to the population in Germany not shrinking, but rising to the record level of around 83 million. One in four of the total 416,000 asylum applications filed in 2020 in all 27 EU states was received by German authorities. The vast majority of recipients remain permanently dependent on transfer payments. Meanwhile, some 500,000 highly qualified people have left the country in the last ten years to escape a tax burden that the Greens, Social Democratic Party, and Left Party want to see rise even further for the so-called high earners. This is another way of creating a social imbalance. But you will not read a word about that, even from complaining researchers and authors like Julia Friedrichs.

This article first appeared in a slightly abridged version with the title “Die deutsche Gerechtigkeitsdebatte hat System” in the Neue Zürcher Zeitung of April 6, 2021, p. 19, and online at nzz.ch. Second publication with kind permission of the author.