Economic Liberalism Is Not Social Darwinism: From Adam Smith to Charles Darwin 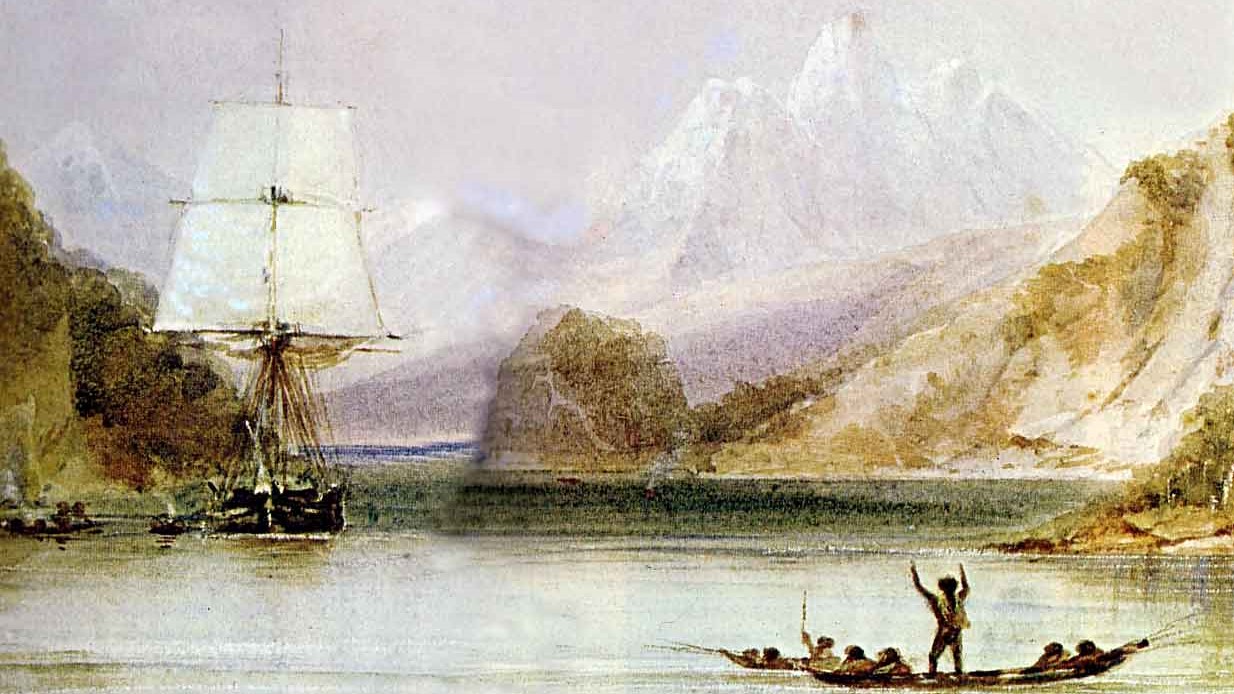 The HMS Beagle is greeted by the indigenous people on her second voyage (1831-1836) while surveying the Tierra de Fuego (painted in 1833 by the ship’s painter Conrad Martens). On this voyage, Charles Darwin recognized Adam Smith’s idea of the division of labor as a paradigm for complex evolutionary processes. (Image: Wikimedia Commons)

In a liberal economic order, the most skilled workers and the most productive companies succeed. Critics often refer to this as “Social Darwinism,” in which the strongest dominates. But that is incorrect. A hundred years before Darwin, the Scottish economist and philosopher Adam Smith discovered that due to the division of labor, the most skilled workers and enterprises prevail, not simply ones with the most brute strength. Charles Darwin (1809 – 1882) is indebted to the Scottish philosopher and economist Adam Smith (1723 – 1790), who was conducting his research a century before.

The economic system… consists of a continuous process of adaptation and innovation, which ensures that the most successful survives—to the benefit of the entire system.

So-called Social Darwinism transfers Darwin’s thoughts in a simplistic form to human society. According to this idea, society develops through a struggle for existence, in which the biologically stronger or genetically better-equipped prevails. Generally, Herbert Spencer (1820-1903) is considered the “inventor” of Social Darwinism, but this is not true, because Spencer was a classical liberal and did not think in biological categories. He also did not speak of the “right of the strongest,” but—just like Darwin—of the “Survival of the fittest”). This plays a decisive role in Darwin’s theory of natural selection, but it is not based on a ruthless fight for survival in which the “stronger” prevails, but on the optimal adaptation to new environmental conditions, which leads to the survival of the most successful in this respect.

A century earlier, Adam Smith had thought in an analogous way in his description of the logic of economic success: the division of labor. It, too, is a process in which the optimally adapted is the most successful.

The Division of Labor Enables Continuous Adaptation and Innovation

In the very first chapter of his best-known work The Wealth of Nations (first edition 1776), Smith mentions three main reasons for the division of labor: first, the greater of each worker; second, the time saved by not having to switch from one activity to another; and finally, the invention of a variety of machines. It is evident that a worker is and becomes more skillful when he has fewer individual activities to perform, that he saves time when he does not have to constantly switch to another activity, and that in the process he also develops ideas about how a machine can perform certain activities faster and more effectively.

Only the division of labor can make possible economic prosperity, thanks to a constant increase in productivity. The economic system thus develops itself without any orders “from above.” It consists of a continuous process of adaptation and innovation, which ensures the survival of the most successful—to the benefit of the entire system.

This becomes even clearer in the second chapter of Smith’s best-known work. He summarizes the principle underlying the division of labor in a captivatingly simple way: “Whoever offers to another a bargain of any kind, proposes to do this. Give me that which I want, and you shall have this which you want. (…) It is not from the benevolence of the butcher, the brewer, or the baker that we expect our dinner, but from their regard to their own interest.”

As soon as some entity plans and determines who has to produce what, how they must produce it, and how much they must produce, the process of adaptation and innovation no longer works. Too much of a certain type of cheese, too little bread, etc. is produced, or certain products are changed, so that the demand for the semi-finished products necessary for their production can also change greatly—and the plan is thwarted. Everyday life in the now-imploded planned economies—in the Soviet Union and its satellites, in Chile under Allende, in China at the time of Mao, places that were occasionally managed by benevolent politicians and experts—make this manifest to the whole world.

Darwin: “My Studies Consist in Adam Smith and Locke”

The belief that the idea of evolution as due to a continuous process of adaptation suddenly fell from the sky with Darwin is most certainly wrong. Quite apart from earlier evolutionary theories rejected by Darwin (such as that of Lamarck), one of the thinkers Darwin was demonstrably influenced by was Adam Smith, for his view that order could arise from an unplanned process. For Darwin had already studied Smith before his trip around the world, long before he came up with the idea of the development of species by natural selection, and long before 1859, when he published his main work on the Origin of Species.

After seeing a rainforest in Brazil, Darwin came up with the idea of applying Adam Smith’s notion of division of labor to “specialized” species in an ecosystem.

While studying at Cambridge, he wrote in 1829, “My studies consist in Adam Smith and Locke.” Then, in late 1831, he sailed around the world on the Beagle in a voyage that lasted almost five years. Captain Robert Fitzroy hired him as a scientifically literate companion for his voyage on the “HMS Beagle.” After seeing a rainforest in Brazil, Darwin came up with the idea of applying Adam Smith’s notion of division of labor to “specialized” species in an ecosystem—after reading on the Beagle from French zoologist Henri Milne-Edwards that one could apply Adam Smith’s idea of division of labor to the organs of the body:

“The advantage of diversification in the inhabitants of the same region is indeed the same as that of physiological division of labor in the organs of the same individual body—a subject so well explained by Milne-Edwards” (Darwin, On the Origin of Species, 1859).

In his work The Structure of Evolutionary Theory (p. 230), evolutionary biologist Stephen Jay Gould cites a note by Darwin dated September 23, 1856, in which he draws a direct parallel between diversification in nature and the economic principle of division of labor: “The advantage in each group becoming as different as possible, may be compared to the fact that by division of labor most people can be supported in each country.”

Darwin was a real natural scientist with a broad general education—something that hardly exists today. Darwin obviously concluded that if such a highly complex entity as the market can organize itself without a planner, then neither does life or nature need planning either.

Complex Structures Are the Unintended Result of Evolutionary Processes

According to economist and social philosopher Friedrich August von Hayek, the idea that the complex structures in human life are the result of an evolutionary process dates back to antiquity. Roman jurists and linguistic theorists were already aware that they were dealing with complex structures that far exceeded the human mind. These structures were not created consciously by humans but are the result of a process of development. Hayek distinguishes between cultural and biological development. Cultural development is not a planned creation of the human mind, but the result of continuous experimentation with no underlying plan. Hayek’s theory is one of evolutionary development of collective properties, i.e., the properties of societies and their institutions.

It is also remarkable that for Hayek the social order based on private property and family is supported by an almost religious faith. It has apparently prevailed because it is more successful than other orders. This hypothesis cannot be proven, but it has been confirmed again and again throughout history. If a society is based on private property and the family, then it develops and spreads faster than other forms, as history up to the present day has shown.

The most important counterproposal to this today is the socialist planned economy, even though no such planned economy survived for long, or could only delay its demise through the use of force and the deprivation of liberty. Soviet communism disintegrated after almost exactly seventy years. The two remnants, Cuba and North Korea, depend on constant help from other nations, and China has become increasingly capitalist since Deng’s reforms.

A Lesson that Economics and Politics Ignore

While Darwin’s theory is now an integral part of biological science, the same cannot be said of self-organization as a principle of economics. In fact, it is mostly ignored. Smith, as stated above, started from the idea that an economy is able to organize itself because of the division of labor. The governments of probably all countries are obviously convinced or have an interest in the fact that the economy must be managed somehow. That is why they enact more and more regulations, but they do not achieve what they actually intend.

The industries hit by the COVID-19 crisis receive a lot of money, but at the same time, so-called zombie companies are allowed to survive, thanks in no small way to this pandemic relief money, and thus they stand in the way of the emergence of new companies or the further development of more productive ones that already exist. Today’s leading economists, mostly Keynesians, do not seem interested in hearing anything about this. Even politicians and parties who call themselves liberal unfortunately support this progressive establishment.