On Our Own Behalf: The Austrian Institute introduces itself 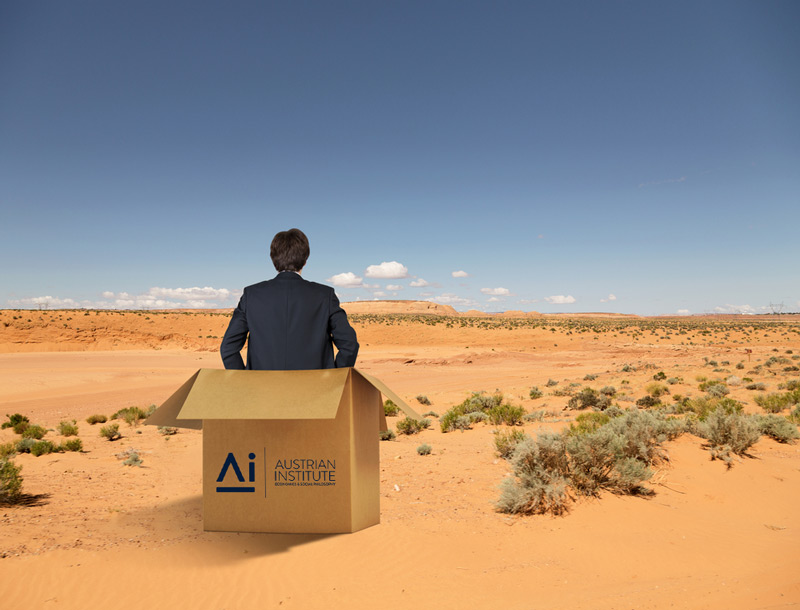 In 1949, the future Nobel-Prize winner Friedrich August Hayek—one of the most important representatives of the Austrian School of Economics – said the following in an essay entitled “The Intellectuals and Socialism”: “What we lack is a liberal utopia, a program which seems neither a mere defense of things as they are nor a diluted kind of socialism, but a truly liberal radicalism which does not spare the susceptibilities of the mighty (including the trade unions), which is not too severely practical, and which does not confine itself to what appears today as politically possible.  We need intellectual leaders who are willing to work for an ideal, however small may be the prospects of its early realization.  They must be men who are willing to stick to principles and to fight for their full realization, however remote” (“The Intellectuals and Socialism”, University of Chicago Law Review, Spring, 1949).

For Hayek, a society is “liberal” (in the original, classical sense) when individual freedom and responsibility are the priorities: a society where no person can compel other people to live according to his own ideas.  This would be a society based on the free cooperation of persons, in which the State takes up, more than anything else, the task of protecting this freedom and promoting it, and – ever in the interest of individual freedom – of placing limits on it in an orderly way, so that everyone has an equal chance before the law to pursue the goals he chooses for his own life.   Of course this does not mean that all goals are equally valid, or that there cannot be right and wrong ways to conduct one’s life.  But it is not the State’s business to intervene in this through coercion.  To be liberal does not mean “to have no opinions about right and wrong” – it means, rather: not to force these views on others with the help of the State.

Now, just how such a society would look precisely and in concrete detail, is matter for dispute, and there are numerous views that can be held about it.  Nevertheless, in Hayek’s understanding (and also according to his teacher Ludwig von Mises), classical liberals are people who are convinced that there can be no political freedom without economic freedom, and that wherever political freedom is lacking, economic freedom will eventually bring it about that people acquire political freedom as well.  And they are convinced that an order arises from the powers of freedom that not only creates material well-being, but is also the foundation of true culture and truly spiritual goods.  This is why they are enemies of socialism and all socialist tendencies, and are convinced that only a market economy and a capitalistic form of economy is reconcilable with a free and humane society.

This is the view of the collaborators of the Austrian Institute, whose activity begins with the publication of this website. We want to help realize this classical-liberal “Utopia” in Hayek’s sense. “Utopia” is not meant in the familiar sense of something remote from reality, but rather in the sense of what many people (even today) cannot imagine, due to their customary ways of thinking and acting, and because it is something that, in political terms, is not immediately, or even speedily attainable.  And yet, if reality is ever going to change, it must begin in people’s minds. Ultimately, the power of ideas is what shapes the world. And we would like to contribute to the victory of better ideas.

We are not ideologues or dreamers, nor do we stand for a doctrinaire liberalism that espouses only one “true teaching”: but we do stand for principles. Liberal thought, after all, is thought that is based on principles.  The liberal principles which we represent can be supported by believers of all kinds as well as by agnostics and atheists.  Nevertheless, we have a special goal – as we affirm in our “Mission Statement” – to promote understanding, among Christians and within ecclesiastical circles, that the goals of Christian ethics can best be realized under the conditions of capitalism and the free market.

In doing this we are orienting ourselves primarily toward the many-sided outlook of the Austrian School of Economics, which unfortunately plays only a marginal role in today’s academic profession. This is connected with the current political context, whereby governments and politicians are convinced that they are able to plan, steer, “handle” or “fine-tune” the economy, and where the “Austrian“ way of thinking (as they call it  in the English-speaking world) is perceived as being too theoretical or even disruptive.  And yet this is just what makes their way of thinking so interesting.  It reveals a reality of economics and society that one cannot get control of from above through planning and steering actions, but rather is built from below, through the spontaneous coordination of the powers of the market – and these are nothing but acting human beings – and operates in ever new and surprising ways for the increase of prosperity.

In contrast with other economic perspectives, which are founded on more abstract models and technocratic paradigms, the Austrian School of Economics represents true economic humanism: the real human being and his free actions take the center stage. In fact, the great representatives of this school, especially F. A von Hayek and Ludwig von Mises, were also philosophers of society. They influenced and fertilized a whole series of social-philosophical initiatives of other liberal thinkers and authors. But a special emphasis of the Austrian Institute is to bring the tradition of the Austrian school into relationship with another current of thought, to which it is inwardly akin, although many may not see it in this way: the European tradition of natural law and Christian social teaching, the principles of which can gain in theoretical clarity and practical applicability through contact with the thought of the Austrian school.  At the same time, these principles can complete and deepen the social philosophy of the Austrian School of Economics and other market-oriented approaches.

In order to realize the “liberal Utopia”, of Hayek’s thinking, we would like to contribute certain educational offerings that we will gradually be preparing, through news items, commentaries, and scholarly studies, both those we are writing ourselves and already existing materials that we are going to make available, which have hitherto been unavailable – often for reasons of language. We also understand, entirely in keeping with Hayek’s thinking, that the work of our Institute will be an “evolutionary” project, whose definitive contours will only gradually become crystallized over time.

The name “Austrian Institute” should become a trademark for the ideas of the “Austrian School of Economics” in the German-speaking world as well.  In order to attain our goal, we need to take, as it were, a very “deep breath” to get started.  We hope that the feedback and the support (which we will also be needing at the material level) will enable us to take that breath, indeed.

The Team of the Austrian Institute