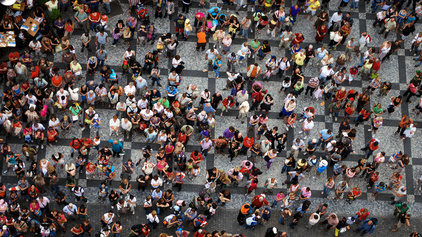 As many opinions as heads? Those who believe their own to be true are therefore not intolerant, provided they do not impose them on anyone and respect the freedom of others. (Image: fotolia/florin)

These days, liberals like to refer to themselves as skeptics or relativists and are averse to any absolutization of values or principles. They consider dogmatic and intolerant those who are convinced of “absolute truths,” and they describe their own skeptical-relativist credo as the basis for a liberal understanding of state and society.

Liberal and tolerant is what you call someone who is convinced of a truth, but, out of respect for the freedom of the other person, does not force this truth upon him or her—and certainly not through state coercion.

Of course, they too are firmly convinced that two plus two is four and not five. Likewise, they are convinced that in science, truth does not follow the majority, but rather the majority follows the truth. Nevertheless, they assert again and again that anyone who believes in “absolute truths” or claims any objectivity for one’s views, not considering everything a subjective opinion that is provisional and thus merely putative knowledge, is intolerant at best and dangerous at worst.

However, the liberal is on the wrong track with this fight against truth. Mussolini declared that he was a relativist and did not believe in any “objective and eternal truth,” and that all ideologies were of equal value—therefore that he had the right to impose his ideology on others. Indeed, he said anyone for whom nothing is true and sacred, who considers the truth of anything to be an aberration, can claim for himself the right to impose “his truth” on others.

Tolerance and Compulsion—And the Intolerance of Relativists

Yet, rightly considered, one who considers everything uncertain and any claim to truth excessive, and therefore pleads for the equivalence of all opinions, is not tolerant. This indifference is a very poor foundation for tolerance as a virtue. This is shown by the fact that people, whose tolerance is based on the dogma of the indifference of all opinions stand out as having a special aggressiveness towards everything that they regard as “not liberal.” Because they have put on the halo of tolerance for themselves, and they think that they are permitted to insult and make any accusatory and sweeping attack for the sake of their good cause.

Fighting against truth is nothing but concealed intolerance. Although it can rightly be in reference to historical experiences of religious intolerance and fanaticism, it responds in a one-sided and biased manner. Liberal and tolerant are not appropriate adjectives for the one who tolerates other opinions out of a thought that nothing is objectively true or right, or for one who thinks oneself better than others for this reason. Liberal and tolerant is what you call someone who is convinced of a truth, but, out of respect for the freedom of the other person, does not force this truth upon him or her—and certainly not through state coercion.

Only for the truth-loving and convinced person is tolerance possible at all. For tolerance and liberalism do not protect opinions and convictions, but the persons who represent them.

This does not mean that everyone should live isolated with their own private opinions. This is by no means only about living and letting live. The liberal wants to convince others precisely on account of conviction and because he or she struggles for the truth. He or she, too, is allowed to be an advocate and missionary of ideas. That tolerance which is also the basis of a politically liberal attitude does not spring from indifference to truth, but from respect for the freedom of those who think differently. Only for the truth-loving and convinced person is tolerance possible at all. For tolerance and liberalism do not protect opinions and convictions, but the persons who represent them, and their freedom to represent them—even if one considers their convictions wrong.

Political liberalism is the institutional, constitutional anchoring of the primacy of freedom over truth. It says nothing about the truth itself, its existence, or its recognizability. A liberal can be agnostic or believe in religious dogmas. But the principles of liberalism deny him the right to use the coercive means of the state to impose either of these on his fellow citizens.

Especially when it comes to claims of religious truth the alarm siren sounds for many liberals. It has long since been recognized in church circles, and theologians traumatized by the supposed shortcomings of modernity have allowed themselves to be intimidated by it. For well over a century now there has been, as a reaction to fundamentalist biblical exegesis, the development of “liberal Protestantism,” and with a century’s delay we now also speak of “liberal Catholics” who are striving to “democratize” the church and pluralize it from a dogmatic perspective.

This can be recognized as a reaction to historical attempts by Christian churches to impose on human society the truth of their doctrine of salvation, and to create political structures that safeguard their teaching. This was done in Catholic, Lutheran and Zwinglian varieties, with the Calvinists going the farthest.

Therefore, the confessional civil wars of the early modern era—driven by competing religious claims to truth—called for a political solution. The modern secular state did not emerge as a liberal state, but as an absolute, denominational state that, for the sake of peace, i.e., for political and thus secular reasons, raised the religious commitment of the ruler to official state doctrine—whoever did not like it had to emigrate.

The Roots of Liberalism and Their Renewal in the Enlightenment

Liberalism developed as a reaction against the denominational, absolutist principalities of modern times—not as a turning away from the Middle Ages. In fact, history had long since departed from the latter. In many respects, the medieval period was much better than is suggested by its reputation—which was damaged by Renaissance polemics.

The Middle Ages, since the 11th century the seedbed of modern Europe, renewed the ideas of political rule as a mixed constitution, of governing by law and within the limits of natural law, of popular election of the rulers and their responsibility to the governed, and of legislation that is not concerned with the salvation of souls but is limited to what is necessary for civil coexistence in peace and justice. It was precisely these ideas of the High Middle Ages that were revived in the Age of Enlightenment, and which historically ignorant liberal narratives still persistently ignore to this day.

A liberal heart should beat faster here. Because for liberals it is essential that the state not tell us how to be happy, but instead only tells us what is necessary for living together in freedom and justice. Precisely because the state does not prohibit everything that is immoral, prohibiting only what is opposed to the preservation of individual freedom and civil coexistence, is it based on limits that are absolute to the extent that they protect rights.

In the liberal understanding, individual rights are not entitlements to state benefits, but define limits to state intervention on individual freedom. Because limits have the character of absolutes, individual rights cannot be justified in a relativistic way. A liberal state is aimed at making it possible for people who have different convictions about the truth to live together in legally recognized freedom. In particular, it is aimed at religious freedom and creating the space for each person to determine the course of his or her life.

“Liberty is not a means to a higher political end.  It is itself the highest political end” declared the Catholic liberal Lord Acton in his “The History of Freedom” (1877). Freedom is the security of everyone to be able to do what one thinks is right, without being hindered by any authority, by the majority, by customs and traditions, or by the opinions of others. According to Lord Acton, state restrictions on individual freedom are only justified if they are in the service of enabling the freedom of everyone.

A political culture of tolerance is not a culture of relativism or indifference. 19th century liberals often justified freedom of religion, conscience, and worship with the argument that there is no religious truth, or at least that it is not recognizable. This was an error of reasoning to which, running in the opposite direction, even the 19th century religious opponents of religious freedom succumbed. From their conviction that an absolute religious truth existed, they concluded that it must be recognized and privileged by the state.

On the other hand, prominent 19th century Catholic liberals such as Charles de Montalembert and Lord Acton advocated ecclesiastical recognition of religious freedom and they were thus ahead of their time. Today, both the times and the church have changed. Years ago, I told a German cardinal who was the top ecclesiastical guardian of the faith, and who a little later became Pope: “Your Eminence, I am not a liberal Catholic, but a Catholic liberal.” The cardinal, now Pope emeritus, replied: “Das gefällt mir!” (“I like that!”).

This article originally appeared in the newspaper Neue Zürcher Zeitung on January 11, 2019

Translation from German by Thomas and Kira Howes