Is the Pope Calling for a Universal Basic Income? 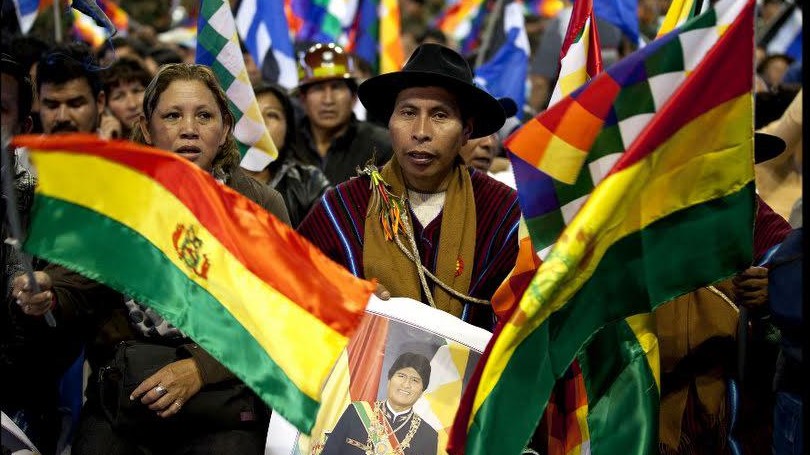 A participant in the World Meeting of the Popular Movements with Pope Francis at the Vatican in 2015, holding in his hand a picture of the President of Bolivia, Evo Morales, who was expelled by his people in 2019 for mismanagement and abuse of power (photo source: aleteia.org).

On Easter Sunday this year, Pope Francis surprised the public with an unusual proposal: in a letter to what he calls the “popular movements,” representing those who “have been excluded from the benefits of globalization,” he advised them to consider “a universal basic income”—known in German-speaking countries as “unconditional basic income.” This is an astonishing demand for the Pope to make, since a universal basic income is generally understood as an income that is paid to all persons, without distinction, the richest as well as the poorest, and demanding nothing in return.

Help for the Marginalized, Not a New Socio-Political Model

Pope Francis, however, understands a universal basic income as help for “street vendors, recyclers, carnies, small farmers, construction workers, dressmakers, the different kinds of caregivers.” For those, then, who—as he writes—“are informal, working on your own or in the grassroots economy,” but who have “ no steady income to get you through this hard time” and for whom, in particular, “the lockdowns are becoming unbearable.” But if it is meant like this, it cannot be a universal basic income. Whoever advances papal authority for this idea either has not understood Pope Francis or is pursuing his own political agenda.

A market economy can only function for the benefit of all in a state governed by the rule of law if the state protects property rights and other fundamental rights and ensures that contracts are enforced.

Francis is obviously not concerned with a new socio-political model, but only with those who are socially and economically marginalized, for whom he has a special heart—in this way he stands safely in the best Christian and ecclesial tradition. When he addresses with this heart the “popular movements” of the poorest and most marginalized, he does so in the conviction that the marginalized represented by these movements are victims of the fact that the “market solutions” cannot reach those who are on “the peripheries” and that they remain excluded from the “benefits of globalization.” This is also because where they live and work, “State protection is hardly visible.”

The Market Economy: The Solution to the Problem of Poverty

In this regard, the Pope actually hits the nail on the head. It is precisely the market economy that is the solution for overcoming poverty, and it is the benefits of globalization that have accelerated this process tremendously in recent decades—only these blessings do not seem to reach everyone. This is only possible where there is “state protection.”

A market economy can only function for the benefit of all in a state governed by the rule of law if the state protects property rights and other fundamental rights and ensures that contracts are enforced. Only then can globalization also benefit everyone and gradually become an engine for development and growing prosperity for all sections of society. One might wonder, however, whether Francis meant it that way.

The successes of recent decades in the global reduction of poverty are striking and should actually give cause for optimism.

The “popular movements,” which he has already addressed at several meetings, are a gathering place for the populist left—i.e. not for the friends of the market economy and globalization. And Francis himself has repeatedly denounced the market economy and globalization as causes of the marginalization of the poorest and of a “throwaway culture” that even throws away people.

But if it were meant that way, Francis’s ideas would conflict with the facts. For it is precisely in economically free countries where people have escaped poverty and prospered, where they have reaped the fruits of opening their country to the market economy and international trade, and where the state has protected rights and property, thus allowing private enterprise, including that of the poor, to flourish. The successes of recent decades in the global reduction of poverty are striking and are actually cause for optimism.

For reasons that are unclear, representatives of the Church often find it difficult to share this optimism. Indeed, there are countries and societies where this process does not take place—but these are societies with corrupt and dictatorial governments, war zones, or countries where there have been socialist experiments. We can think of Venezuela—and also of Bolivia, where Pope Francis gave his landmark speech on a just economy at the “World Meeting of Popular Movements” in 2015. Why did he denounce the shortcomings of the market economy and globalization in a country that at that time still propagated the “socialism of the 21st century” but, as we know today, failed miserably because of it?

A Basic Income Would Require a Flourishing Economy

If today Francis sees a “universal basic income” as a possible solution, this is actually an admission that his conception addressed to the “popular movements” is not feasible.

What he is now demanding for those who have no secure income and for whom the period of quarantine is an “unbearable burden,” however, seems almost like squaring the circle: Why should it be possible to provide entire social classes with an adequate basic income in places where there is no rule of law and other kinds of state protection? Surely only nations with a reasonably well-functioning public administration and otherwise flourishing economies can afford this, if at all!

Contradictions can also be seen in the fact that Francis was always a declared opponent of a public culture of handouts. In his interview book Pope Francis: In His Own Words—as Cardinal Bergoglio at the time—he said that governments should “promote a culture of work, not of almsgiving,” because “work confers dignity” (our translation of German text). And indeed, people who are forced to work without any kind of labor registration or property guarantees are now particularly hard hit by the current pandemic. Emergency financial assistance, as we take for granted here, would certainly be appropriate in this case.

With proposals that disregard political circumstances, legal requirements, and economic laws, it is impossible to solve social problems in a sustainable way, even if we have the best of intentions.

The only catch is that this is not possible in the countries the Pope is addressing, for the very reason that they do not share in the blessings of the market economy and globalization. They are too little governed by the rule of law, often too socialist, in many cases too corrupt, actually bankrupt, and the rulers and rampant bureaucracies are emptying the people’s pockets. The Venezuelan President Maduro is still clinging to his illegitimate power and enriching himself and his power clique. The Bolivian President Evo Morales was driven out by his people because of rampant corruption, mismanagement, and authoritarian behavior, and the country is currently in crisis mode. This means that in such societies, they lack the necessary conditions for a basic income paid by the state, in the sense of emergency aid for quarantine victims—the real concern expressed by Pope Francis.

With proposals that disregard political circumstances, legal requirements, and economic laws, it is impossible to solve social problems in a sustainable way, even if we have the best of intentions. What is needed are governments that create the legal framework for a healthy market economy, entrepreneurial initiative, and globalization, which will enable the poorest people in particular  to build a legally secure existence for themselves and their families from the fruits of their labor: all this made possible by state property protection. However, the societies addressed by the Pope are often still a long way from achieving this.