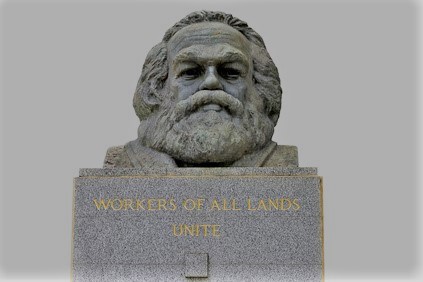 Bust of Karl Marx over his grave in the Highgate Cemetery in London: “Workers of all lands unite”—today they are united in the prosperity that capitalism has created in spite of Marx’s predictions. (Picture: Fotolia/ kmiragaya)]

“But you’re a Marxist!” Who wouldn’t feel insulted if he were called that? Marx has a bad reputation, and “Marxists” have an even worse one. But Marx is currently enjoying a renaissance—one often hears that “the man was right about some things” or even that “he is still quite relevant.” For most people, however, “Marxist” remains a bad label.

Of course, people today still favor social justice and increasingly complain about social inequality. And clearly, so the story goes, capitalism must be reined in, otherwise the rich will become richer and richer, and the poor will become poorer. Moreover, everyone knows that we in the rich countries all live at the expense of the poor countries. And the big corporations, indeed the entrepreneurs in general, only get rich at the expense of ordinary citizens. And how about all this digitalization and increasing automation! Seeking returns on their investments, greedy investors will destroy more and more jobs. If capitalist greed for profit is given free rein, the world will necessarily go south, and we will even destroy our planet!

Marx has—in an ingenious way, to be sure—succeeded in shaping the thinking of even those who indeed reject his program.

We have already read all this somewhere, in a more or less pointed form—and some of it has stuck in our heads. And many—intellectuals, politicians, but also committed and affluent citizens—believe and proclaim it. Even the affluent and liberal supporters of the “social market economy” speak this language today, not to mention socialists, left-wing liberals, and socially active church leaders.

However, these are myths that Marx created or circulated. Marx has—in an ingenious way, to be sure—succeeded in shaping the thinking of even those who indeed reject his program with its philosophy of history, built from the fragments of false economic theories.

He achieved this by describing the forces that are the source of prosperity as rather the driving forces behind the impoverishment of the masses. For the cause of modern mass prosperity, which is spreading more and more throughout the entire planet as a result of globalization, is precisely the “capital” that Marx insulted in the first volume of his major work as “dripping from head to foot, from every pore, with blood and dirt.”

It is true that Marx expected the necessary collapse of capitalism as a precondition for a humane future society. Today, however, we merely want to correct its allegedly self-destructive structure, which favors the rich at the expense of the poor.

Even advocates of the free market often fail to recognize what a fundamental fact Marx, with his work on capital, was able to suppress from our everyday consciousness concerning the achievement of the capitalist entrepreneur.

We are adherents of a modified “prosperity Marxism” and its view of history, which reads: The exploitation of wage earners by capital and their increasing impoverishment could only be stopped by the pressure of the trade unions and redistributive social policies. In this way it becomes possible to correct capitalism and its inherently anti-social tendency to monopolize and concentrate wealth and economic power. “Socially” containing, and reining in the market and competition remains, even on a global scale, the way to social progress. All of these ways of thinking are steeped in a deep mistrust of capitalism and free markets, and fail to recognize their wealth-creating power, which is historically beyond question.

Marx had taught that the increase in productivity was of no use to the worker; only the capitalist would benefit. He did not see that increases in productivity alone lead to increases in real wages and reductions in working hours, making the goods that are necessary for life better and more affordable.

Most consumers in the 19th century were farmers and workers, whose standard of living gradually rose as a result. Gradually, what was once luxury consumption became mass consumption. Even today, goods and services are constantly coming onto the market that were previously unavailable or only available to the richest. What counteracts this are mostly governmental and political mistakes, such as those of the last financial crisis. Contrary to common belief, that crisis was the fault of the state, which legally required the banks to grant irresponsible loans while giving them a state guarantee, thus inciting their greed.

Marx, with his theory—based on Ricardo’s labor theory of value—of the surplus value of labor, appropriated by the capitalist, created the instrument to blind us to the real performance of “capital”: entrepreneurial performance and technological innovation. This is what generates added value and wealth.

Marx, on the other hand, presents us with the capitalist as a greedy owner of the means of production who employs workers—solely in order to appropriate the “surplus value” of their work and to accumulate more and more “capital.” In his wake, the accumulation of capital and the social inequality that accompanies it—as prerequisites for the production of mass wealth—are still today misunderstood or even denounced as scandalous.

The value of a produced good does not come from the work that went into it, but from the appreciation of consumers. Discovering their needs and preferences, and translating them into productive work is the achievement of the entrepreneur or “capitalist.”

For Marx, it was worker’s labor that creates the value of a product and its added value, of which he is then supposedly robbed by the capitalist. In reality, however, the capitalist creates the added value of the worker’s labor. He does not do this altruistically, but because he wants to make money. However, without the capitalist’s entrepreneurial vision, his organizational performance, his anticipation of consumer needs and market opportunities, without the technological innovations he has initiated and, finally, without the risk he bears—entrepreneurs who go into debt have no hidden treasure chest—the majority of 19th century people would have starved to death or never been born.

The value of a produced good does not come from the work that went into it, but from the appreciation of consumers. Discovering their needs and preferences, and translating them into productive work is the achievement of the entrepreneur or “capitalist.” A beneficiary of this is the worker who receives a wage for this work created by capital.

Never before had there been a sustainable combination of strong population growth and rising living standards. It was only possible thanks to a steady increase in labor productivity.

Capitalism saved hundreds of thousands of lives in the 19th century. The greatest misery was in the countryside. But where there was industry, people were better off. Despite misery and high infant mortality, the standard of living began to rise over time, also in the industrial cities, and even though the population growth was enormous. The capitalist dynamic allowed more and more workers to live a dignified life by the standards of the time.

Never before had there been a sustainable combination of strong population growth and rising living standards. It was only possible thanks to a steady increase in labor productivity. Even the overcoming of child labor—a centuries-old evil—was not simply snatched away from modern capitalism: rather, it was only possible because of it, even if it took several decades to achieve.

Many today often resist a sober and realistic view the narrative for emotional reasons, or because they are plagued by personal fears of rejection by their peers or colleagues. Therefore, they interpret today’s circumstances in a one-sided way. Even as regards questions of globalization, and increasing automation and digitalization, they still think with brain cells programmed by Marx. For they are fixated on inequalities, but at the same time are blind to the fact that on our planet prosperity and quality of life are constantly increasing, poverty is decreasing globally—even if there are always short-term losers in this process. They do not see that the lessons of history also apply to countries still living in poverty today. Secure property rights and the resulting development of capitalism and entrepreneurship are also the path for them to live a life in dignity and prosperity.

Even advocates of the free market often fail to recognize what a fundamental fact Marx, with his work on capital, was able to suppress from our everyday consciousness concerning the achievement of the capitalist entrepreneur. There are—as there are everywhere—failures, cheats and crooks. You will always find examples of these, and the scandal-hungry affluent class will pounce on these with relish. But that is all too easy. Most capitalists are decent, imaginative, or at least effective benefactors of society. Their efforts, in which they themselves have the most to lose, is the cause of the prosperity of the general masses—even on a global scale.

This article originally appeared in the Neue Zürcher Zeitung on May 3, 2018, p. 39. Online version here.