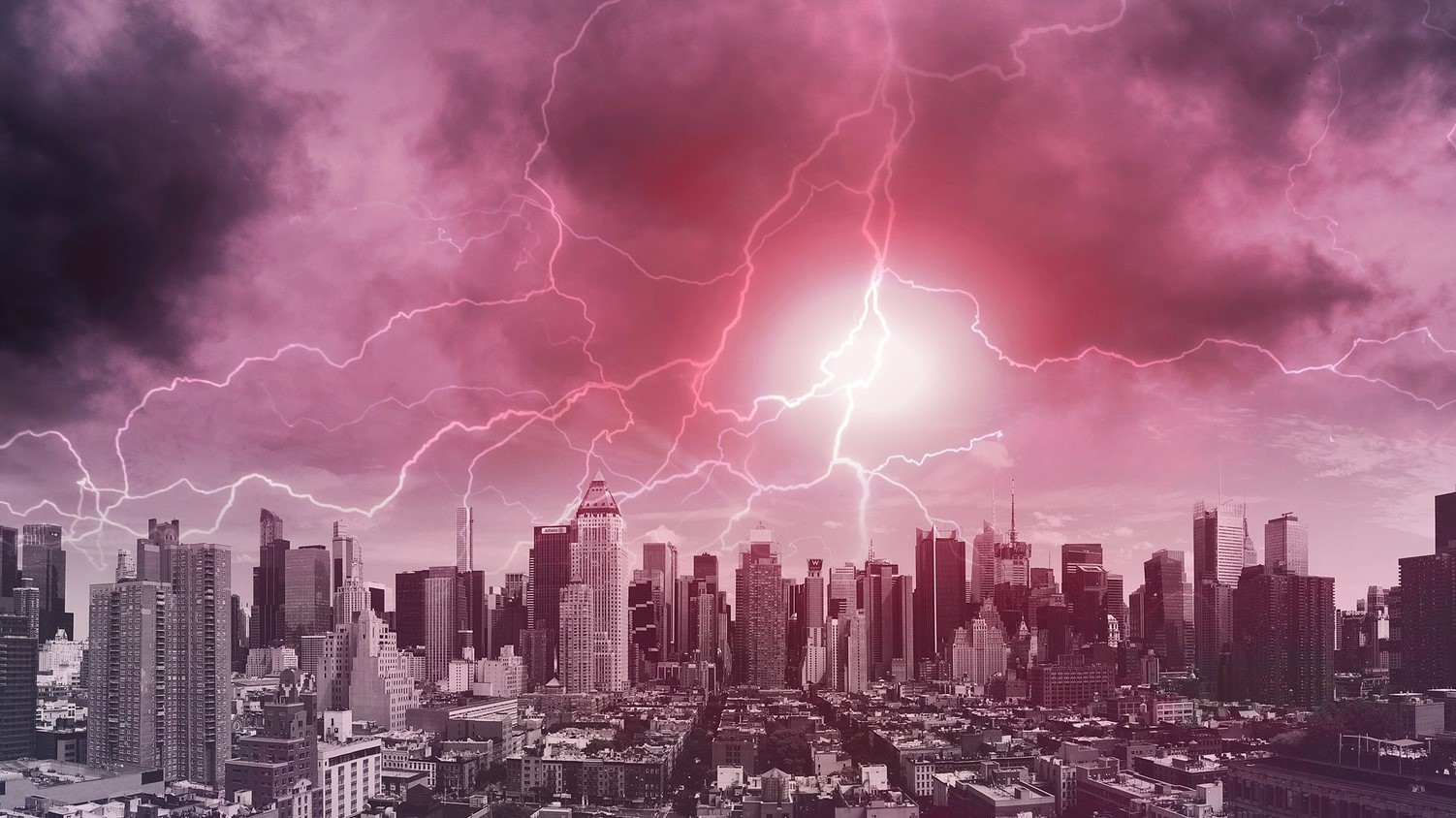 The Greens are painting a picture of an environmental and climate apocalypse. In doing so, they are trying to moralize the debate and portray themselves as the advocates of the good. The reality, however, is more complex. (Image: Gerd Altmann / Pixabay)

Past elections in various countries have shown how the issue of climate change can mobilize voters, especially young voters, and bring the Greens considerable success. In particular, climate policy has since become a rallying point for fundamental critiques of society and of capitalism, in which the central characteristics of the thinking and actions of Greens become particularly clear.

The Greens see the widespread “low” and “evil” mindset of many people as the cause of the climate crisis.... This view creates an image of a clear moral enemy.

The Greens describe themselves as the “most moralistic of all parties in Germany”—according to Boris Palmer, mayor of Tübingen and (still) a Green Party member. And indeed, the Greens pursue a strongly moralistic policy based on clear (implicit or explicit) value judgments.

Ethical Moralization of the Climate Debate

The Greens see the widespread “low” and “evil” mindset of many people as the cause of the climate crisis. They argue that the world’s climate is being destabilized because malicious and reckless people are deliberately endangering the climate to pursue their selfish goals. This view creates an image of a clear moral enemy and allows the Greens to divide the world according to a scheme of good vs. evil, and to emphasize their own moral superiority over others. This is because, in the Greens’ view, good action is expressed solely through a good disposition and not, for example, through the positive consequences of action. This ethical outlook absolves good-minded people from having to consider the actual consequences of their actions and from having to justify them. The good intention alone legitimizes a person’s actions; whether the actual purpose of the action is achieved is then largely irrelevant.

The political offer that the Greens make to voters is a moral and caring central government. This offer is most in-demand when social problems, crises, or catastrophes are a real threat or are constantly presented as such in politics and by the media. A central policy element of the Greens is therefore first to outline supposed social crises and threats and then to offer state protection.

The Greens are calling for a “climate-friendly economy” in which people’s needs and wants play only a subordinate role.

The Greens base the legitimacy of their actions primarily on the protection of the climate and the preservation of the earth itself. According to their election platform, they do not strive for a humane prosperity, but for a “climate-friendly prosperity.” They see it as their highest obligation to do everything to protect the climate and to subordinate everything to this goal, since a climate catastrophe is imminent.

The politics and especially the climate policy of the Greens is strongly influenced by ideology, since climate protection is elevated to the all-important “question of the survival of mankind” and is absolutized as the highest social goal, to which all other goals must be subjugated. The Greens call for a “climate-friendly economy” in which people’s needs and wants play only a subordinate role. No compromises with other social goals can, or should, be made if the climate goal is absolute. And, of course, any tools and means are justified in order to achieve this goal—if necessary, even the deliberate violation of democratic and constitutional principles.

The ideology-based nature of Green climate policy is also evidenced by the fact that many of the measures proposed by the Greens do not contribute to a rational solution to the climate problem, but only serve to propagate their worldview. After all, many energy and climate policy proposals turn out to be pure illusions and wishful thinking when confronted with the hard facts of economic and scientific reality. Climate protection as a mobilization strategy is therefore much more important for the Greens than is asking about the efficiency and effectiveness of climate policy measures. To quote Robert Habeck: “The climate crisis, or the question of how to fight it, is not just an economic debate, but also a cultural one.”

The Greens combine moral pretense and ideological conviction with a pronounced rationalistic constructivism and a tendency toward dirigisme. They have very concrete ideas about how certain areas of society should function and what social outcomes are desirable. In this context, the Greens think primarily in terms of bans and state directives, with which they would like to bring about what is politically desired on numerous issues directly, as quickly as possible, and in many areas of society. The Green Party’s list of bans and phase-outs is so long that its representatives need to bend over backwards to minimize it. Thus, Katrin Göring-Eckardt speaks not of bans, but of “radical-realistic demands,” and Robert Habeck immediately reinterprets the Greens as a “design party.”

This striving for “design” is motivated by the Greens’ understanding of justice and their view of humanity. They criticize the distribution that results from the market as inherently unjust and antisocial, and thus, they hold as social principles the rejection of the justice of achievement and of the justice of rules. The Greens focus their view on the outcomes and demand justice of outcome or social equity. In doing so, however, they lose sight of the process that gives rise to these results, i.e., the actual production process, in which they are only marginally interested. They carelessly ignore the fact that state intervention in the price mechanism inevitably leads, with respect to their noble goals, to a shortage of supply, combined with long lines and red tape.

A Critique of Growth and Capitalism: Let’s Change the System!

This immediate focus on social outcomes gives the Greens a lot of leeway in a moral interpretation of market outcomes and their rejection. This is accompanied by an open or hidden critique of growth and capitalism. Many people therefore view climate policy as a suitable way to undermine private enterprise and thwart unwelcome competition, which have always been unpopular for other reasons.

It makes some sense that the election program of the Greens reveals—in the opinion of the Federation of German Industries—a “distinctly dirigiste understanding of the state, which, with a very narrow perspective on a state goal of climate protection, seeks to replace principles of the social market economy with concepts of state control and redistribution.”

The multitude of bans, restrictions, and technology specifications as well as state micro-management in all areas of life, as the Greens demand, are elements of a different social order in which the state controls economies and lives—without regard to economic feasibility. The previous social market economy of Ludwig Erhard and Alfred Müller-Armack must be supplanted by a “global socio-ecological transformation”—with the goal that all economic activities be aligned with the “prosperity of society as a whole” (according to the Green manifesto of 2020).

The Greens Have No Interest in an Open-Ended Discussion

However, such results can only be achieved if the state massively interferes within competition and determines competitive outcome according to its ideas of fairness. Annalena Baerbock admits as much: “We have to be radical and quite openly demand a system change.” And nothing is better suited for this system change than climate policy, which can be used to override liberal and free-market principles and usher in a renaissance of state-directed ideas. These tendencies can already be observed today; they will become much stronger in the wake of the EU’s Green Deal. We are well on the way to an ecologically and morality-based paternalistic society, the eco-dictatorship that many Greens desire.

The Greens will not settle for less than their goal. That is why they forbid any criticism of the majority opinion about climate science and its basic moral positions. They are less interested in an open-ended discussion, and in finding the most suitable climate policy measures, than in confirming their ideological beliefs. Discrediting critics as “climate deniers” is evidence of a less than democratic understanding of society and less than open discourse.

Whether the Greens manage to achieve their goal depends on the voters. So long as the latter continue to settle for sentiment and morality and do not demand fact-based solutions, the Greens have no incentive to move away from their morality-based strategy. Voters—and the mainstream media—must demand an open and unprejudiced discussion and must place value on responsible and discerning reason and judgment. This is the only way possible to restore a proper balance in politics between sentiment and responsibility—between “morality” and reason.

A shorter version of this article appeared in the Neue Züricher Zeitung on July 20, 2021, under the title: “Die grüne Verbotsliste wird immer länger.”

A detailed and richly documented version of this paper in German can be found as Austrian Institute Paper 39/2021.