Freedom or Equality? “Social Justice” Is Not a Demand of Classical Liberalism 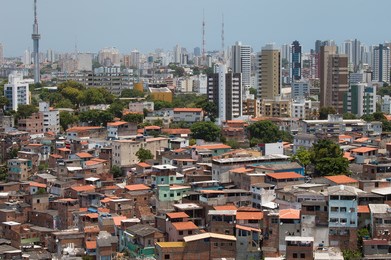 Social inequality is evident in many places. Often, however, it is most strongly perceived where it is no longer an existential problem—Is this a consequence of the entitlement mentality generated by the welfare state? (Picture: fotolia/gustavo)

Friedrich Hayek’s famous thesis that the free market is the greatest discovery in the history of humankind strikes people as cold. Thus, there is an acutely felt need for emotion here, the need for an emotional shaping of modern society. This is what the mass media does by constantly highlighting social inequalities. In this way they serve the Rousseauian nostalgia for a society guided by archaic feelings, in which an authoritarian state visibly creates “social justice.”

The Mystery of Social Justice

“Wherever differences are lacking, violence threatens.” This sentence, written by the cultural anthropologist René Girard, should stand over the entrance gate to modern mass democracy. Culture is always differentiation, and de-differentiation provokes violence. For it is not differences, but their dissolution that generates rivalry. And it is a bitter irony of world history that the modern process of democratization has not weakened the power of rivalry but has increased it. It is precisely the modern principle of equality that generates violence. The loss of differences first creates rivalry, for which the differences are then blamed. This is the explosive charge of the concept of “social justice.”

Nobody can define this term, but that is precisely why it works so well as an emblem of the do-gooder, a cipher for the right moral feelings. it is here that our fully enlightened society allows itself one last great mystification: the appeal to an incommunicable feeling. Social justice replaces the sacred.

The hatred of inequality is the democratic passion par excellence. And the fewer inequalities there are, the greater the hatred for them.

More equality through redistribution therefore seems to be the most natural political demand, and every day it resonates in the mass media. In the perception of inequality, after all, the filter of the social classes and castes has been removed—everyone is a person like you and me. And that tends to make every inequality a scandal. Social comparison generates envy and inflates expectations. And it is in this desire for equality that the greatest danger of modern democracy lies, namely, the temptation to prefer equality in servitude to inequality in freedom.

Historically, freedom and equality initially fight together, but they separate after victory. In other words, equality and freedom will unite, just as long as equality can use freedom politically. Only in the fight against autocratic rulers are freedom and equality on the same side of the barricade. But the cult of victorious equality then quickly demands the sacrifice of freedom.

The hatred of inequality is the democratic passion par excellence. And the fewer inequalities there are, the greater the hatred for them. The principle of equality thus seems paradoxical: the more equality is enforced in practice, the more intolerable any remaining inequality becomes. The greater the equality, the more relentless the desire for even more equality. The statistically proven inequality is interpreted as injustice and is then used as central evidence in the ideology-critical process against civil liberty. However, equality under the law does not exclude all inequality, but rather arbitrariness.

We become mature adults when we have learned to live with inequality. We then no longer confuse injustice with inequality. After all, injustice is not inequality, but is rather that which prevents motivated people from advancing. You do not need a theory of society to understand this, just common sense.

The Paternalism of the Preventative Welfare State

The state is increasingly interfering in even the most trivial matters of citizens. It provides for the health, work, education, and training of its citizens, but it  also takes it upon itself to safeguard our mental health and instills in us the correct feelings and ideas. In modern mass democracies, those in power are no longer tyrants but guardians.

Welfare state policy creates immaturity, that is, that state of mind resisted by every form of enlightenment. And just as it takes courage to use one’s own intellect, it takes pride to live one’s own life independently. Therefore, as in the Middle Ages, personal pride is the greatest sin in the welfare state. For the parental state does not want its children to grow up. But the paternalism of the provident welfare state is not simply forced upon people—they want it, because it relieves them of the burden of freedom. A world managed by guardians is a dream come true for many.

Those who are comprehensively cared for no longer need any free will at all and feel that total provision is a blessing. Democratic despotism relieves people both from the annoyance of reflection and from the hardships of life. A network of small, specific rules hangs over everyone’s existence and makes them dependent on the provident welfare state even in the simplest matters of life. The caregivers see themselves as the good shepherds of a diligent flock. And the few who resist are not coerced but discouraged; they are not tyrannized but demoralized.

Social justice as redistribution provides for the political normalization of immaturity; it teaches people to feel helpless.

The preventative welfare state operates with three shortcomings. It infers: from inequality to disadvantage; from disadvantage to social causes: and from social causes to paternalistic measures. It thus takes on overall responsibility for modern society. Even when it is not yet called by this name, the provident welfare state has gathered for itself new servants—those who are cared for. Today, most people no longer owe their security to the law, but to state welfare. In the preventive welfare state, public welfare becomes preventive: help is provided even when there is no need whatsoever. In concrete terms, this works in such a way that the caregivers generate the need for care by inventing deficits. Thus, the welfare state does not support the needy but rather the social workers and administrators.

Therefore, redistribution policy does not reduce poverty but rather the costs of poverty. Indeed, every transfer reduces the incentive to overcome poverty through one’s own productivity. In other words, most political aid programs encourage a lifestyle that leads to poverty. The mass media then do the rest: you learn to feel helpless when you observe others who are exposed to uncontrollable events. And, thus, one longs for the protective father, who in fatherless society, must of course be the state.

The total provision of services of public interest takes away the money of the self-employed and the dignity of the persons cared for. Therefore, what really touches the dignity of man is precisely the benefit of the state that makes him dependent. The policy of the welfare state, typically redistribution and taxation on wealth, thus yields paradoxical results. Welfare recipients lose their dignity because they cannot earn what they receive. The productive ones follow the logic of economic Darwinism and become even more productive in order to actually develop the “strong shoulders” on which the burdens of “social justice” rest.

Freedom and responsibility are replaced by equality and care. Today, the rule of law no longer offers any real protection against dependence on the supplying, providing state. For this reason, we are constantly threatened with being dominated by care—first being cared for, then becoming dependent, then being subdued.

We must learn to distinguish between the reasonable demand that everyone should have enough and the utopian demand that everyone should have the same amount. The fact that one is worse off than others may still mean that one is doing well enough. On the other hand, those who are fixated on equality measure their life satisfaction not by what they themselves have at their disposal, but by what is available to others. The concern for equality distracts one from concern for oneself, that is, from the question of what is truly important.

This text corresponds to the presentation that Norbert Bolz gave at the “Forum Freiheit” of the Friedrich A. von Hayek Society on the topic “Wohlfahrtsstaat als Allmende: The Tragedy of the Commons” on October 24, 2018 in Berlin. See here the original German version.